Ex-Servicemen Take Out March Against One Rank One Pension Notification 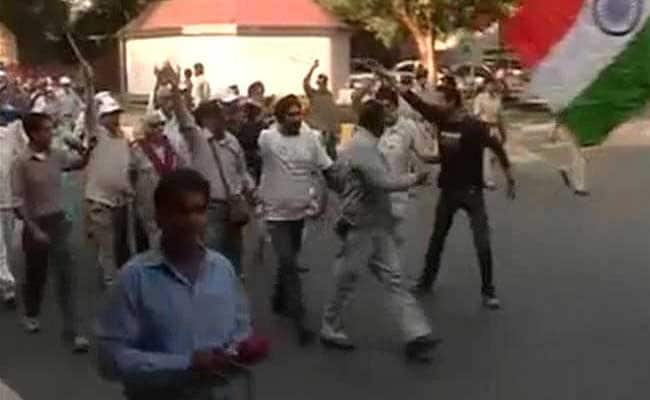 The veterans say they are unhappy with the OROP package announced by the government, which has said pensions will be equalised every five years.

New Delhi: Dissatisfied with the government's announcement on One Rank One Pension or OROP, military veterans are today observing what they call a 'Black Diwali'.

Escalating their protests, a group of veterans today launched a protest march in Delhi and tried to make their way to the President's House but were stopped by the police.

Despite the government hurrying over the weekend to issue a notification on their long held demand of pension reform armed forces veterans yesterday began returning medals they have been awarded in service of the country, protesting against what they call "the dilution of the definition of OROP".

"The fact that you are forming a parallel commission while issuing notification means they themselves agree that notification is flawed," Group Captain V K Gandhi said.

The veterans say they are unhappy with the OROP package announced by the government, which has said pensions will be equalised every five years.

The ex-servicemen want pensions to be equalised every year. Also, the OROP notification says soldiers who opt for pre-mature retirement or leave the forces without completing their full term, will not qualify for OROP. The veterans oppose this.

Not all ex-servicemen have, however, joined the latest protest. The Indian Ex Servicemen League - one of biggest and oldest bodies - will stay away.

Defence Minister Manohar Parrikar has indicated that the government is in no mood to be pressured any longer. "In a democracy people can demand whatever they want, not everything can be met," he said yesterday.

On Sunday, in the final step to implement the scheme, the government notified OROP, which provides that armed personnel of the same rank will draw the same pension regardless of when they retired.

The announcement last week that the veterans would return medals was seen as a move to pressure the government into notifying OROP before Diwali as it had promised.