Trump's Rolling Stones Favourite Follows Him To India Despite Controversy 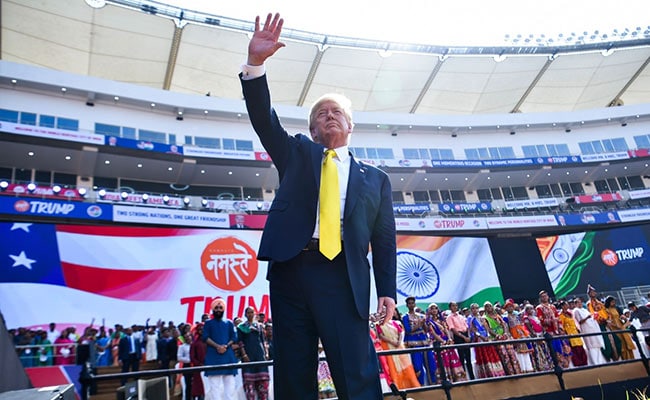 A tune starts playing at the world's largest cricket stadium in Gujarat after US President Donald Trump and Prime Minister Narendra Modi end their address today. It is choir music, and soon people are tweeting about it.

The music is from an album by The Rolling Stones, released in 1968.

The song "You Can't Always Get What You Want", written by The Rolling Stones' vocalist Mick Jagger and songwriter Keith Richards, is often heard being played after campaign speeches by President Trump across the US.

Today, it was played at Motera stadium as President Trump started walking down the stage with PM Modi at his side.

Mick Jagger has released multiple statements since 2017, asking President Trump not to use their song in his campaign. But their songs continue to remain on the US President's campaign team playlist.

Earlier in the day, PM Modi hugged President Trump after he landed in Ahmedabad, along with First Lady Melania Trump and family members.

Then they went to Sabarmati Ashram, where President Trump spun the charkha. He and his wife also left a message on the visitors' log: "To my great friend, Prime Minister Modi, thank you for this wonderful visit."

The Trumps have gone to Agra to see the Taj Mahal. They will come to Delhi tonight and will start the operative part of the two-day visit tomorrow with trade talks.