In another Facebook post this afternoon, the dancer said the state government has told her that she would be performing on qawwali at UP's statehood celebration. 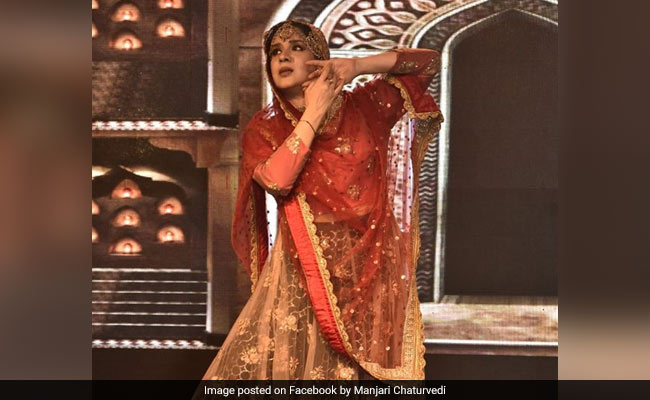 Manjari Chaturvedi, a well-known Kathak dancer, was allegedly forced to stop her performance midway at an event organised by the Uttar Pradesh government in Lucknow on Thursday evening, allegedly because she was performing on a qawwali - a form of Sufi devotional music.

Ms Chaturvedi alleged that while she was performing on the qawwali, the music was stopped and an announcement was made for the next act. "I thought it was a technical glitch but then the next act was announced. It was clear that this was not an error. When I asked the concerned officials, I was told "qawwali nahi chalegi yahan (qawwali cannot happen here)," she told a news channel.

The incident took place at a dinner hosted by the UP assembly speaker for a conference of the Commonwealth Parliamentary Association.

In a Facebook post hours after this alleged incident, the noted dancer said "This is the show that will be etched in my memory forever. Will share those details later."

Ms Chaturvedi told the media that she was allotted 45 minutes for her act and it was pre-planned, yet her performance was stopped midway and no explanation was provided. "I have never encountered this kind of thing before in my two-decade old career," she said.

A government spokesperson denied the allegations and told NDTV everyone at the function was aware a part of her performance would be on a qawwali. The spokesperson said she was invited for this only and that the title of her performance was Rung-e-ishq, a name cleared by the UP government. The spokesperson said "due to heavy rains in the city on Thursday, delegates reached the venue only at 8.45 pm, about an hour late. Since everyone was running late, it was decided to cut short the programmes and 15 minutes were allotted for each programme. Ms Chaturvedi was performing a dance on prerecorded music and the music was stopped after 15 mins by her technical staff."

In a Facebook post this afternoon, Ms Chaturvedi said the UP government has told her the programme with qawwali will be part of the Uttar Pradesh's statehood celebrations on January 27 this year which will be attended by Chief Minister Yogi Adityanath.

Manjari Chaturvedi is a post graduate in environmental science. She is a leading exponent of Kathak and is also credited with creating and performing for an art form called Sufi Kathak. She trained in Lucknow and in the last decade has performed at over 200 concerts all over the world.