The 15-second clip from the neighbouring Raigad district was sourced from the National Disaster Response Force (NDRF) and had been viewed over 30,000 times within minutes. 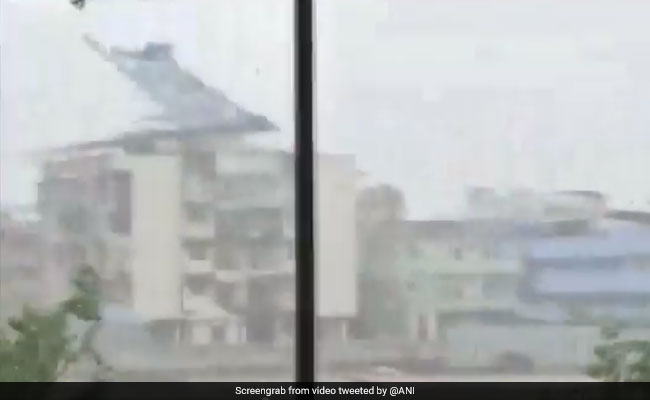 A dramatic video of a tin roof getting blown off a building was shared by news agency ANI hours after tropical storm Nisarga made landfall near Alibaug, a popular coastal getaway about a 100km from Mumbai.

The 15-second clip from the neighbouring Raigad district was sourced from the National Disaster Response Force (NDRF) and had been viewed over 30,000 times within minutes. It is one of the numerous clips being shared from the coastal areas of Maharashtra that have been battered by heavy rain and strong winds of 100-120 km per hour that have uprooted trees, snapped power cables and damaged buildings.

Maharashtra, Gujarat, Daman and Diu, and Dadra and Nagar Haveli have been put on high alert as some parts of these two states and the union territories fall on the path of the cyclone - the first to hit Mumbai in a century and second to hit the country in two weeks.

#WATCH Tin roof atop a building in #Raigad blown away due to strong winds as #CycloneNisarga lands along #Maharashtra coast (Source: NDRF) pic.twitter.com/INlim5VG1c

The Indian Meteorological Department has said that a storm surge - as high as two metres (three to 6.5 feet) above the astronomical tide - may inundate the low-lying coastal areas of Mumbai, Thane and Raigad districts.

In Maharashtra, more than 19,000 people have been moved to safety and 43 NDRF teams deployed in coastal areas expected to be affected in Maharashtra and Gujarat.

"The evacuation is nearly complete. Those in shelters are being trained for life skills and social distancing is being ensured. All preparations are in order. Let's hope we safely ride through the cyclone," NDRF chief SN Pradhan said in a video message this afternoon.

Maharashtra Chief Minister Uddhav Thackeray on Tuesday appealed to the people of the state to "stay indoors" for two days. "The cyclone could be more severe than the ones the state has faced till now," Mr Thackeray said. With over 70,000 COVID-19 cases, the state is the worst-hit in the country by the pandemic.