Cyclone Bulbul Intensifies, Odisha And Nearby Areas To Experience Rain

Cyclone Bulbul, currently moving at a speed of 13 kmph, may intensify further by Saturday. It is unlikely to make a landfall in Odisha, but the state should brace for heavy to very heavy rainfall in its coastal and northern districts in the next two days. 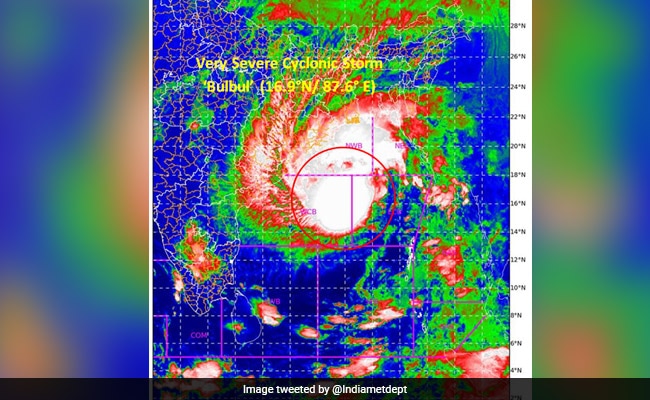 Cyclone Bulbul is expected to have a sustained wind speed of 110 to 120 kmph.

Cyclone "Bulbul" over Bay of Bengal has gained strength and intensified into a very severe cyclonic storm, triggering rain in several parts of coastal Odisha and its adjoining areas, an India Meteorological Department (IMD) official said.

Centred over west-central and adjoining east-central Bay of Bengal, about 310 km south-southeast of Paradip, the cyclone is likely to move towards West Bengal and Bangladesh coasts, skirting Odisha, HR Biswas, the director of Bhubaneswar Meteorological Centre, said today.

The state government, as part of its precautionary measures, has asked administrative machineries to remain "fully prepared" to tackle any contingency.

It is unlikely to make a landfall in Odisha, but the state should brace for heavy to very heavy rainfall in its coastal and northern districts in the next two days, he said.

"The cyclone is very likely to intensify into severe cyclonic storm, re-curve north-eastwards and cross West Bengal-Bangladesh coasts across Sunderban delta on Sunday.

"The storm is expected to have a maximum sustained wind speed of 110 to 120 kmph, gusting up to 135 kmph, while crossing the coast," the senior IMD official explained.

According to IMD predictions, coastal Odisha is likely to experience wind speed of 70-80 kmph gusting up to 90 kmph, accompanied by heavy to very heavy downpour.

Officials have been told to ensure total suspension of fishing operations from Friday. Farmers have also been advised to take steps to protect crops and harvested paddy.

All schools and Anganwadi centres remained closed for the day in Puri, Jagatsinghpur, Kendrapara and Jajpur districts in view of the rough weather.

Mr Jena said the schools would continue to remain shut on Saturday in nine vulnerable districts, including Puri, Khurda, Bhadrak, Balasore and Mayurbhanj.

Two teams of Odisha Disaster Rapid Action force (ODRAF) and one of the National Disaster Response Force are on standby in each of these districts, while adequate fire services personnel have also been deployed in these areas for necessary operations, the special relief commissioner added.