Bihar Election 2020 Phase 1 Voting Percentage Highlights: A total of 71 assembly segments of the state's 243 constituencies are voting in the first phase in which nearly 2.15 crore voters will decide the electoral fate of over 1,000 candidates. 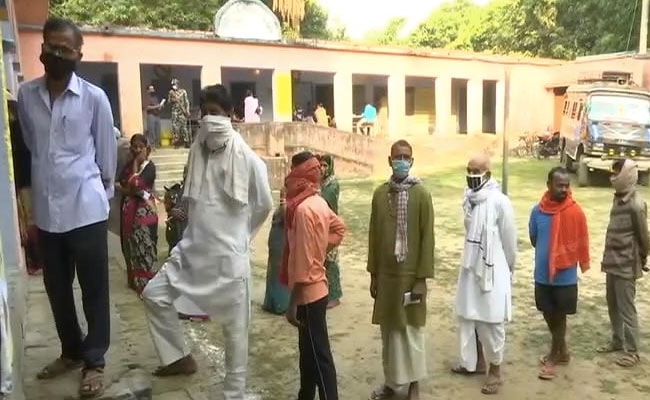 Bihar Assembly Elections 2020: The counting of votes will be held on November 10.

Over 53 per cent voter turnout has been recorded till 6 PM in the first phase of Bihar assembly polls on Wednesday, the Election Commission said in its provisional data.

A total of 71 assembly segments of the state's 243 constituencies are voting in the first phase in which nearly 2.15 crore voters will decide the electoral fate of over 1,000 candidates.

Nitish Kumar's challenger is RJD's Tejashwi Yadav, whose promise of 10 lakh jobs has proved to be a huge draw in the backdrop of the lockdown and widespread unemployment. The third factor in this election is Chirag Paswan, the son of the late Lok Janshakti Party chief Ram Vilas Paswan, whose rebellion against Nitish Kumar is believed by many to be backed by the BJP.

Polling began in seventy-one assembly constituencies of Bihar in the first phase of three-phase elections amid tight security and COVID-19 guidelines in place. Guidelines have been issued by the Commission for the safe conduct of the electoral exercise in the midst of the raging COVID-19 pandemic. A voter turnout of 18.3 per cent was recorded till 11:30 am.

Prime Minister Narendra Modi today asked people in Bihar to go out in large numbers and vote in the first phase of the election to the state assembly, asking voters to maintain coronavirus safety guidelines and wear a mask as they step out to vote. The Bihar election, the first assembly election since the coronavirus outbreak, is being held in the shadow of the pandemic.

More than two crores voters in Bihar will decide the fate of 1,066 candidates today across 71 assembly segments in the first phase of elections.

Here are the Highlights on Bihar Election 2020 Phase 1 Voting: