Prime Minister Narendra Modi said "golden history" was written as he launched the construction of the Ram temple in Ayodhya. 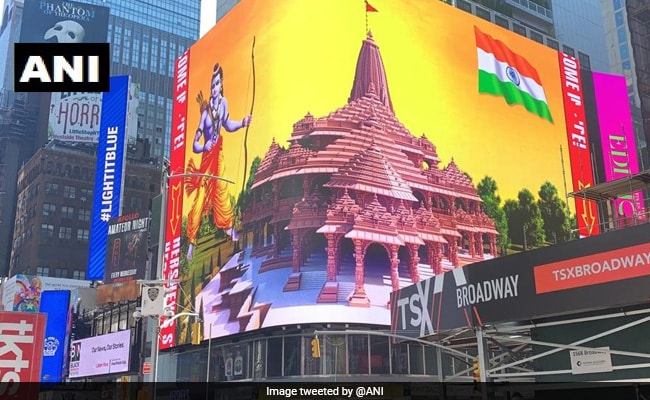 An image of Lord Ram and a 3D portrait of the model of the grand Ram Temple in Ayodhya beamed on a giant billboard in the iconic Times Square in New York to commemorate the temple's groundbreaking ceremony today.

Prime Minister Narendra Modi said "golden history" was written as he launched the construction of the Ram temple in Ayodhya. Amid the chanting of shlokas, PM Modi consecrated the very first bricks for the temple at the spot where many believe Lord Ram was born.

The largest high-definition digital display of Lord Ram is one of the most expensive digital billboards of the Hindu deity at Times Square, reported news agency ANI.

Prominent community leader and President of the American India Public Affairs Committee Jagdish Sewhani had earlier said that among the prominent billboards that are being leased for the occasion are the giant Nasdaq screen and the 17,000-square-foot wrap-around LED display screen, considered among the largest continuous exterior displays in the world and the highest-resolution exterior LED screen in Times Square.

The colourful ceremony in Ayodhya with elaborate religious rituals, involving priests in saffron masks and bricks made of silver, was shown live on television.

Soil from almost 2,000 holy sites around India and water from around 100 holy rivers were used in the rituals.

Last November, the Supreme Court ruled that a Ram temple can be built at the site where the 16th century Babri mosque was demolished in December 1992.

While allotting the Ram Janmabhoomi site for a temple to be built by a trust, it ordered that a five-acre plot should be found elsewhere in Ayodhya for a new mosque.