Delhi Election: Arvind Kejriwal appealed to people of Delhi that even to those who are supporting BJP and Congress to vote for Aam Aadmi Party so that they can continue with their education and healthcare initiatives. 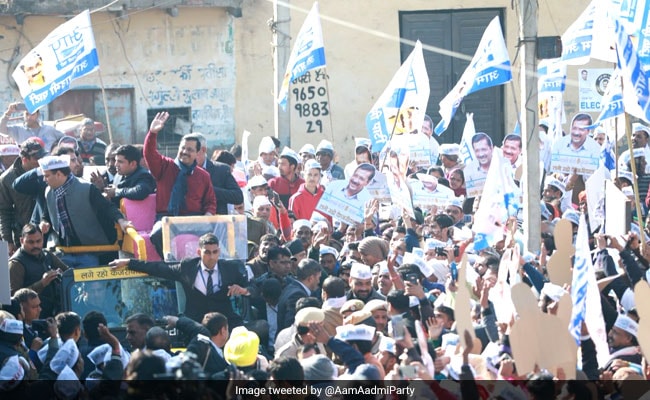 Delhi Election 2020: Arvind Kejriwal waved to the public and shook hands with them

Southwest Delhi's Matiala has become the venue of the big fight today as both Chief Minister Arvind Kejriwal and Union Home Minister Amit Shah vied for voters' attention with rival programes. The day had started with a roadshow of the Chief Minister and is expected to end with a public meeting addressed by Amit Shah.

Delhi votes on February 8, in which Mr Kejriwal is seeking a second term. His Aam Aadmi Party -- which won a record victory last time, capturing 67 of the city's 70 seats -- is targetting all 70 this time.

By mid-day, the narrow streets of Matiala turned a human sea as the procession began. Surrounded by scores of supporters, Mr Kejriwal standing atop an open jeep, waved and shook hands with the locals.

Next to him stood Gulab Singh Yadav, the local MLA who is seeking re-election.

Holding placards in support of various schemes of the government, including free healthcare, and electricity were on display and AAP supporters  danced to the tune of  "Lage Raho Kejriwal (Carry on Kejriwal)" the party's anthem as it blared on loudspeakers.

Yesterday, Mr Kejriwal issued an appeal to the people of Delhi, asking that even those who support the rival BJP and Congress vote for AAP this time so the government could continue its work on key initiatives in education and healthcare.

"We worked hard to improve our schools, the education system, health care... Who will take care of the education of your children, who will help you get good and affordable healthcare if you vote for any other party? Just give it a thought... Cast your vote keeping the welfare of your family in mind," he said.

Earlier this week, he had also announced what he called a "10-point guarantee card", which promised free power, 24-hour drinking water on tap and a world-class education to every child.
Along with it, he promised a clean environment, including a clean Yamuna, and housing to every slum dweller.