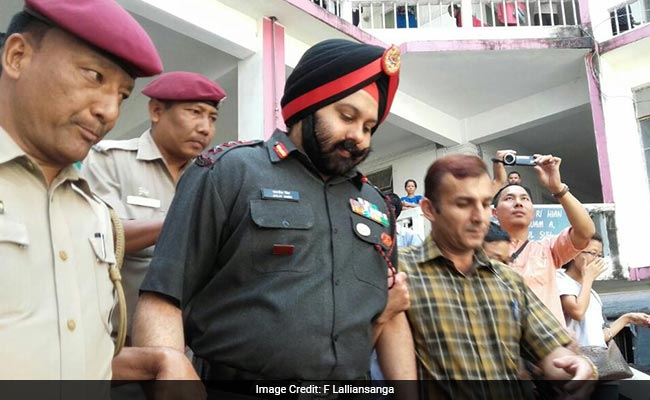 Aizawl: A senior army officer and 8 of his men from 39 Assam Rifles were arrested today for allegedly stealing smuggled gold bars in Mizoram. The alleged smuggler, whom they had allowed to go, had filed the complaint with the police.

In December 2015, Colonel Jasjit Singh's men -- they included officers from 8 other ranks including a junior commissioned officer -- had intercepted the alleged smuggler near Aizawl. Sources said the gold was being smuggled in from Myanmar.

In his complaint to the police, C Lalnunfela said the men stopped his car, refused to identify themselves and searched the car. He and his two companions were made to wait outside. During the search, they found the 52 gold bars in the gear box, worth Rs 14.5 crore.

In the complaint, Lalnunfela said he was convinced that men from the 39 Assam Rifles were involved.

According to the FIR, after threatening Lalnunfela, the men left, loading the gold bars in their three cars. The seized gold, however, was not deposited to the treasury, government sources said.

Lalnunfela is also under investigation and is out on bail at present.

The Mizoram Police allege that efforts were made to recover the gold when it was found that a unit of the 39 Assam Rifles had intercepted it.

A case was filed on April 21, 2016, and a Special Investigation team was formed to look into the heist and the possibility of the army unit's involvement in it.

Colonel Singh allegedly refused to cooperate with the investigation and moved for anticipatory bail. But he was arrested today after his bail plea was rejected. He is in the custody of Mizoram police now.

The Army refused to comment. But Army sources said the officer was relieved of his duties temporarily today.

The Assam Rifles is the oldest para-military force in India and is led by officers from Indian Army. It is deployed only in the North East and is primarily tasked with counter-insurgency operations.
Comments
Army officer arrestedMizoramgold smuggling