Another Uttarakhand Cop Turns Saviour, Carries Ill Pilgrim To Hospital On Back

Sub-inspector Lokendra Bahuguna climbed two kilometers uphill with a pilgrim on his back, ensuring hereceived timely treatment after a heart attack. 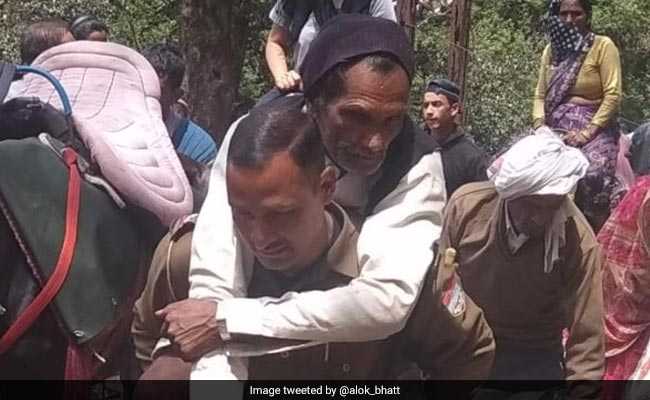 Lokendra Bahuguna carried 55-year-old Ranjhi Rajag to a hospital on his back.

Uttarakashi: After a Sikh police officer Gagandeep Singh won hearts for saving a young man from an angry mob in Uttarkhand, another hero has emerged in the state. Sub-inspector Lokendra Bahuguna climbed nearly two kilometers up a hill with a pilgrim on his back and ensured the man received timely medical attention after he had a heart attack.

Lokendra Bahuguna's heroic act not only proved to be blessing for 55-year-old Ranjhi Rajag but also fetched him accolades, for commitment to his duty.

Mr Rajag, who is from Madhya Pradesh, had collapsed near the Bhairo Mandir, soon after his arrival, Barkot Police Station in-charge Vinod Thapliyal said.

His family tried to take him to a hospital on a horse, but he was not stable enough to sit. It was at this point that Sub-Inspector Bahuguna arrived and offered to carry him on his his back to the Yamunotri Seasonal Hospital.

"With Rajag on his back, he walked two kilometers uphill to the hospital where the he was treated for four hours before being discharged," Mr Thapliyal said.

Doctors at the hospital said Mr Rajag had suffered a mild heart attack.

With tears in his eyes, Mr Rajag thanked Sub-Inspector Bahuguna after being discharged and then went on to worship at the shrine.