A total amount of Rs 17,900 crore was defrauded by 51 absconders, who have run away from the country, the government informed the parliament on Tuesday. 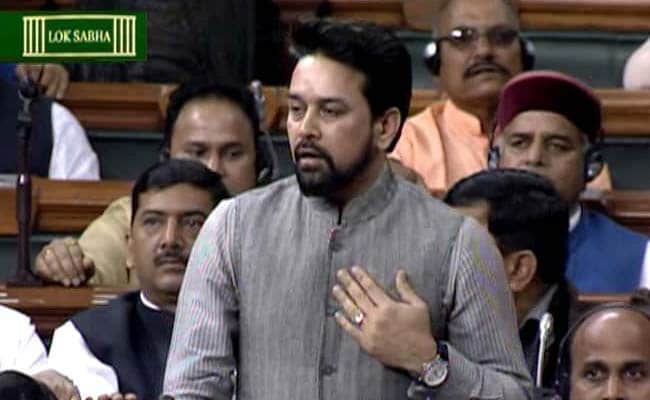 The information was provided by MoS Finance Anurag Thakur in a written reply. (File)

A total amount of Rs 17,900 crore was defrauded by 51 absconders, who have run away from the country, the government informed the parliament on Tuesday.

The information was provided by Minister of State for Finance Anurag Singh Thakur in a written reply to a question on "fugitive economic offenders" in the Rajya Sabha.

"The Central Bureau of Investigation has reported that as on date, 51 absconders and proclaimed offenders in 66 cases are known to have left for other countries.

"Further, the CBI has reported that the total amount defrauded by the accused persons in these cases comes to Rs 17,947.11 crore (approximately)," the minister said.

He was also asked about how much concessions were given or loans written off in these instances.

"As reported by the department of financial services, the expected losses on stressed loans, not provided earlier under flexibility given to restructure loans, were reclassified as NPAs and provided for.

He added that the ED and the CBI had filed applications in respect of these cases in the competent courts and the proceedings were either under investigation or trial.

Mr Thakur said the CBI was "processing" 51 extradition requests that were pending at various stages in respect of proclaimed offenders and absconders.

Talking about other central agencies, he said the Central Board of Indirect Taxes and Customs (CBIC) had reported about six fugitive economic offenders who had left the country illegally.

"The Enforcement Directorate has filed application against 10 individuals in the competent court under the Fugitive Economic Offenders Act, 2018," Mr Thakur said.

"In respect of extradition requests sent by ED for 8 individuals, red-corner notices have also been published by Interpol," the minister said.