Students protesting the suicide of Rohith Vemula say Vice Chancellor Appa Rao should not be allowed back.

Hyderabad: Since Dalit student Rohith Vemula hanged himself in January, the new normal at his university in Hyderabad has been a tension that refuses to dissipate.

On Tuesday, violence erupted as students attacked the media, threw stones at the police and kept the top official at the university hostage by surrounding for six hours the office-cum-residence of Vice Chancellor Appa Rao. He returned to work on Tuesday after proceeding on long leave amid the furious protests that followed Mr Vemula's suicide in his hostel room.

The students say Mr Rao should be fired, not allowed back onto campus, a move that they describe as "the dictatorship of the union government".

The university posted the new of Mr Rao's return on its website on Tuesday morning. The students then gathered at the complex known as the Vice Chancellor's lodge, with some vandalizing the office. The police hours later used batons or lathis to forcibly move the students out. A woman professor was reportedly hit on her head - it's not clear yet by whom. 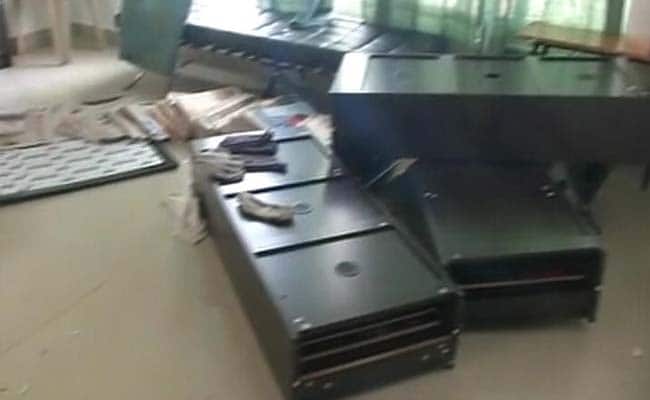 A suicide note Mr Vemula said he did not blame anyone for his decision. But a month before that, a despairing letter sent by him to the Vice Chancellor about caste discrimination said Dalit students should be given "a rope to hang themselves".

Mr Vemula's death has been blamed by his family, a section of students, and the Opposition on the vice-chancellors, Union Minister Bandarau Dattatreya and Union Education Minister Smriti Irani, who have been accused of hounding Mr Vemula and his friends based on a complaint filed by student leaders affiliated to the BJP who study at the same university. The government has denied that Mr Vemula and others were persecuted as a result.

Wednesday threatens to be another testing day. Kanhaiya Kumar, the Delhi student who was arrested on sedition charges, is scheduled to meet with Mr Veumla's friends on campus.

University officials say Mr Kumar's meeting with students, which is likely to include a speech, has not been sanctioned. ''We don't need any permission for a meeting on campus ...the police should be deployed to maintain security,'' said Prashant, a close friend of Mr Vemula, to NDTV.