Ghaziabad: Five cops waited for 24 hours to guard Arvind Kejriwal, who again said 'No Thanks' 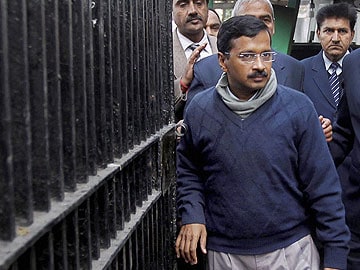 Ghaziabad: For nearly 24 hours, five police officers were parked near Arvind Kejriwal's home, wondering just how exactly they're meant to protect the man who has flatly refused any security cover.

The five men from the Uttar Pradesh police spent the night in a small room near the lift that leads up to Mr Kejriwal's two-bedroom flat on the fourth floor in Ghaziabad, around 15 kilometres from central Delhi. They were asked to watch over Mr Kejriwal by the Delhi Police. They left the premises a little after noon today after Mr Kejriwal refused to accept security.

On Saturday, Mr Kejriwal will be sworn in as Delhi's youngest chief minister. The founder of the one-year-old Aam Aadmi Party (AAP) has told the Delhi Police that he trusts in God, and that he does not want any escorts, but will accept assistance in crowd control.

The former tax official has professed his commitment to the demolition of Delhi's infamous VIP culture that rings in the city's politicians. He has refused a government bungalow, opting instead for another flat in the capital. His 28 elected leaders have said they will not use the 'lal battis' or red beacons that flash on VIP cars and give them the right of way.

Mr Kejriwal's AAP romped to No 2 in the Delhi elections, placing just behind the BJP, and rudely shoving the ruling Congress to a distant third. The BJP said that because it had not managed a majority, it would not try to form the government. The AAP took the same stand, till it decided to hold a public referendum. The results showed the public wanted AAP to take a shot at governing the capital, the party said.