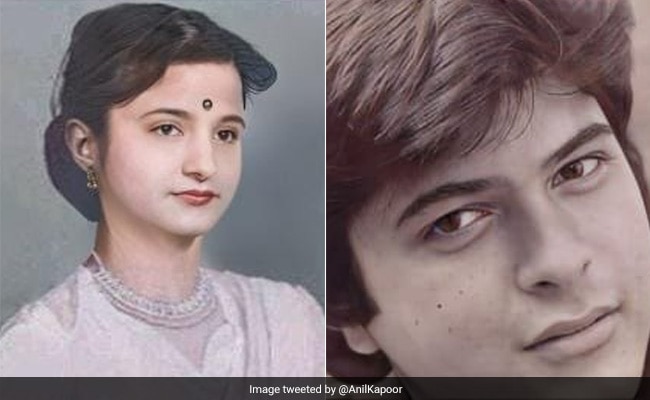 Anil Kapoor has pulled out some of the finest pictures from his family album for a social media upload. The actor, who is known for his fitness regime, has shared a collage of two throwback frames, featuring himself and his mother Nirmal Kapoor. And, the actor just did what most of us have done at some point in our lives. Comparing his facial features to his mother's. Cute, isn't it? Indeed, the two look very similar in these photos, with the same thoughtful eyes and a subtle smile on their lips. Anil Kapoor shared the heartwarming post under the hashtag, "throwback Thursday". He wrote in the caption, "The uncanny resemblance."

Anil Kapoor's fans were quick to share their thoughts. One user wrote in Hindi, "Maa ke jaysa dikhna saubhagya hota hai [To look like one's mother is a good luck]."

This year, Anil Kapoor shared a special post on his mother's birthday. The actor shared a monochromatic photo of his mother from her youth. He captioned it with a sweet birthday note, "To the strongest, most radiant soul in our lives...You light up our lives with your love, patience and endless reserves of hope and optimism...Forever blessed to be your son. Happy Birthday, Mom"

Now, take a look at his Mother's Day post.

Anil Kapoor will next feature in Jug Jugg Jeeyo and Sandeep Reddy Vanga's Animal. The actor was last seen in the Netflix film AK vs AK, co-starring filmmaker Anurag Kashyap.