Would Kajol Have Married Shah Rukh Khan If Not Ajay Devgn? Her Cheeky Answer

Fans just couldn't stop asking Kajol about a possible reunion with Shah Rukh on screen, when she said: "Ask SRK". 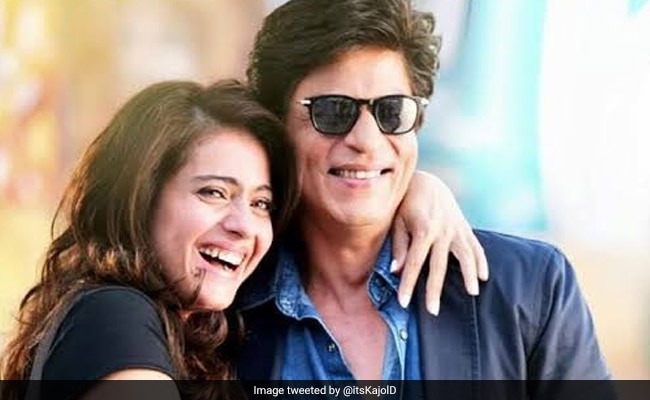 Kajol felt like a session of "ask me anything" on Instagram recently and patiently responded to the queries fired at her, many of which were about her equation with longtime co-star and friend Shah Rukh Khan. Hours later, Kajol found herself trending, particularly for her cheeky answer to this question: "Would you marry SRK if you didn't Ajay Devgn?" Kajol, in good humour of course, responded to the user with these words: "Isn't the man supposed to be proposing?" LOL. Kajol was also asked to define her "bond" with Shah Rukh and she described him as "Friend for life." One follower also asked between Shah Rukh Khan and Ajay Devgn, who her preferred co-star is. "Depends on the situation," she said. Fans just couldn't stop asking Kajol about a possible reunion with Shah Rukh on screen, when she said "Ask SRK".

Here are glimpses of Kajol's Q&A session on Instagram: 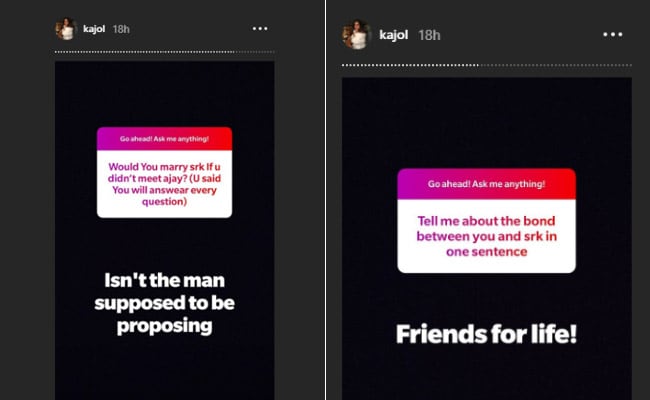 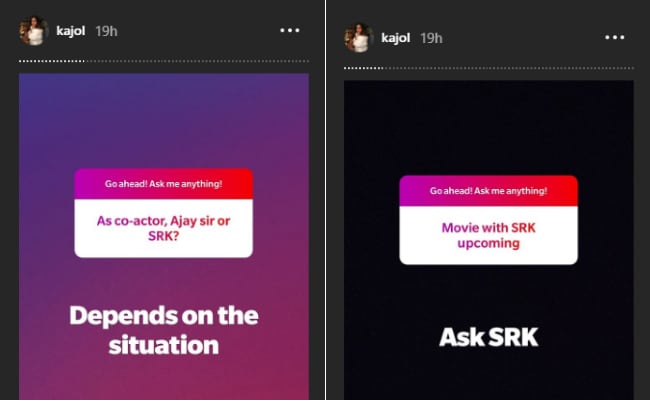 When asked about her first crush, Kajol revealed it's indeed her husband Ajay Devgn: "Married my 1st crush!" Kajol also revealed that she feels a little left out when Ajay Devgn pampers daughter Nysa and son Yug. Take a look at Kajol's responses here: 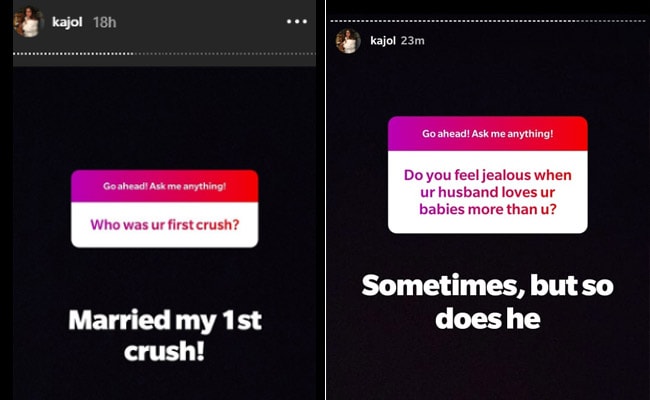 Kajol and Shah Rukh, co-stars of several films, still represent the quintessential Bollywood jodi. The duo's iconic romance Dilwale Dulhania Le Jayenge, released in 1995, has been running in Mumbai's Maratha Mandir theatre for over two decades now. Kajol and Shah Rukh co-starred for the first time in 1993 film Baazigar, which marked the actress' second Bollywood film - Shah Rukh played a grey character in the film. Shah Rukh was already married to Gauri Khan by then and Kajol got married to Ajay Devgn in 1999. Kajol and Shah Rukh have also enthralled audiences with films such as Kuch Kuch Hota Hai, Kabhi Khushi Kabhie Gham..., My Name Is Khan and were last seen together in Dilwale.

Meanwhile, Ajay Devgn and Kajol are co-stars of U Me Aur Hum, Pyaar To Hona Hi Tha, Raju Chacha, Dil Kya Kare and Ishq. Kajol will soon be seen in Ajay Devgn's Tanhaji: The Unsung Warrior, which releases on January 10.