"One has to take it a notch higher on the style quotient when you're standing with Bebo," wrote Akshay Kumar 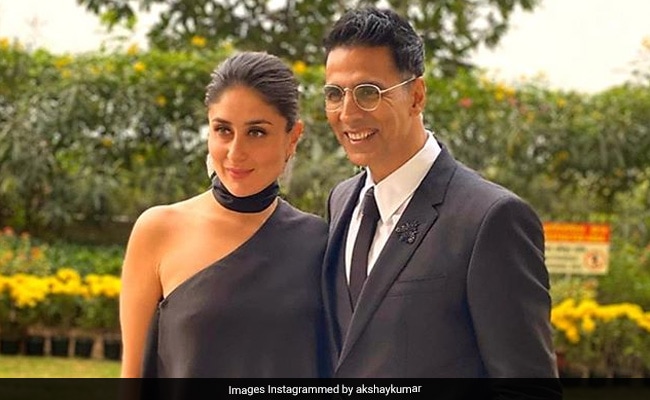 Kareena Kapoor inspires millions with her style statements and her Good Newwz co-star Akshay Kumar's latest Instagram post is just another example of it. In case you are wondering how, the actor shared a picture of himself and Kareena on Friday, in which he can be seen trying to take his "style quotient" a "notch higher" to pose along with the actress. Both Kareena Kapoor and Akshay Kumar look stunning in the photograph. Akshay looks sharp in a white shirt and black pantsuit while Kareena looks gorgeous in an off-shoulder black jumpsuit, which she paired with a black choker. Sharing the photo, Akshay Kumar mentioned the one thing you need to keep in mind if you are sharing a frame with "Bebo" (Kareena Kapoor's nick name).

"One has to take it a notch higher on the style quotient when you're standing with Bebo, killing it in black!" Akshay Kumar captioned his post. The picture is from the Hindustan Times Leadership Summit, which the actors attended on Friday in New Delhi.

One has to take it a notch higher on the style quotient when you're standing with Bebo, killing it in black! #HTLS2019

Akshay Kumar and Kareena Kapoor will be seen along with Kiara Advani and Diljit Dosanjh in Good Newwz. The film is the directorial debut of Raj Mehta. Produced by Karan Johar, Good Newwz revolves around the story of two couples (Kareena-Akshay and Kiara-Diljit) who try to have kids via IVF (in-vitro fertilization).

Kareena Kapoor and Akshay Kumar have previously worked together in various films such as Kambakkht Ishq, Aitraaz, Tashan, Ajnabee, Brothers and Gabbar Is Back. Their upcoming film Good Newwz is slated to release on December 27.