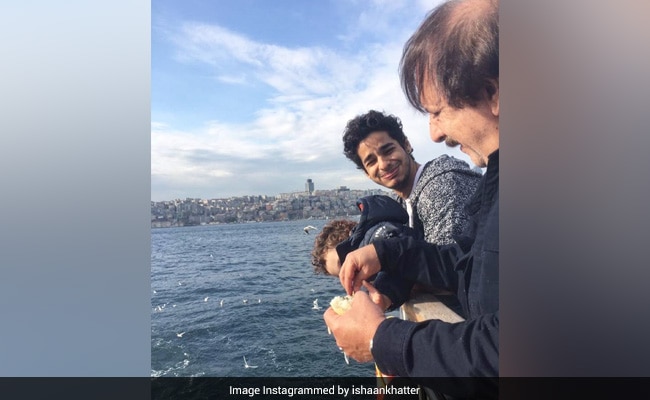 Ishaan Khatter has penned a heartwarming birthday note for Iranian filmmaker Majid Majidi. Along with the note, Ishaan has shared a throwback picture. In the snap, we can see Ishaan grinning adorably while feeding birds along with the director of his first film Beyond The Clouds. Can you spot Majid Majidi's little grandson, Roozbeh, in the frame? Isn't he adorable? Okay, coming back to the post which starts with, "Happy Birthday Magic Majidi." Then, Ishaan walked us through the story behind the snap. And it goes like this, "This image was taken in Istanbul on the beautiful Bosporus river a day before I received my first best actor award for Beyond The Clouds," Ishaan said.

Expressing heartfelt gratitude towards his mentor, the 25-year-old added, "Only he could and entrusted me with the role of Amir, which made me realise that I have no business second-guessing and questioning myself if I was chosen by him."

Explaining the reason behind the smile, Ishaan said that it was Roozbeh who "kept trying to leap out" of his arms "and off the ship to fly with the birds."

Speaking of the film, Ishaan played the role of a drug dealer and hustler. It features Malavika Mohanan as the female lead. Gautam Ghose and Tannishtha Chatterjee are also part of the movie.

Recently, the Khaali Peeli star gave a glimpse of his workout session. The video shows Ishaan performing various exercises staying indoors. He also tried a stick game out in the open. Needless to say, the star was flawless in both. The note attached is something we all need to hear. It says, "Stay strong and connect with yourself. Healing energies for all."

Ishaan was last seen in the Netflix series A Suitable Boy. Next up for him is Phone Bhoot alongside Katrina Kaif and Siddhant Chaturvedi.