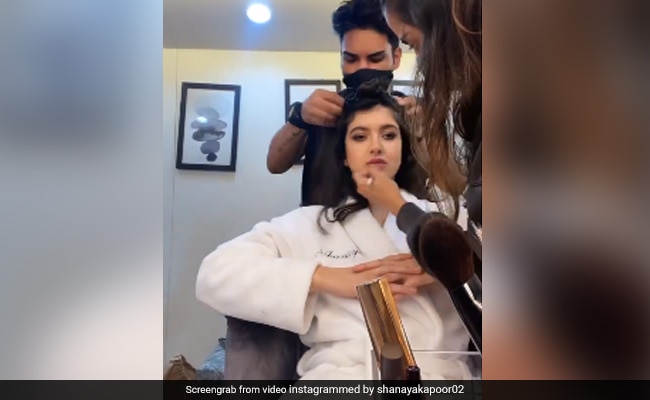 Shanaya Kapoor in a still from the video. (Image courtesy: shanayakapoor02)

Shanaya Kapoor never fails to set style statements with her fabulous looks, but did we know what went into creating these looks? Well, now we do, thanks to Shanaya Kapoor's latest Instagram entry. Shanaya, on Sunday, dropped a brand new video from her vanity room to her Instagram feed. The video gives us a glimpse of how Shanaya gets ready for work and other events. The video captures Shanaya Kapoor sitting in front of a mirror in a white robe while the make-up artists work on her. The time lapse video features Shanaya enjoying several light-hearted moments with her make-up team. Sharing the video on Instagram, Shanaya Kapoor wrote: "If only we could get ready this fast."

The post received scores of comments from Shanaya's Instafam. Among others, Shanaya's mother Maheep Kapoor commented on her post and left a laughing and a red heart emoji in the comments section of the post.

Shanaya Kapoor is the daughter of actor Sanjay Kapoor and Maheep Kapoor. She is quite famous on Instagram and enjoys a fan following of around 800,000 followers on the platform. Shanaya keeps sharing pictures from her every day life on Instagram. Yesterday, she dropped a collage of some mirror selfies from her dance class.

Earlier this week, Shanaya channelised her inner Poo (character played by Kareena Kapoor in Kabhi Khushi Kabhie Gham) in her Instagram post. The picture captures Shanaya dressed in a red crop top and a very dramatic make-up. She captioned the post with a famous dialogue of Kareena Kapoor from Kabhi Khushi Kabhie Gham and wrote: "Tell me how it was."

For those who don't know, Shanaya Kapoor is all set to step into Bollywood with a film by Karan Johar's Dharma Productions.