"Take me back to a mask free holiday," Rakul Preet Singh wrote 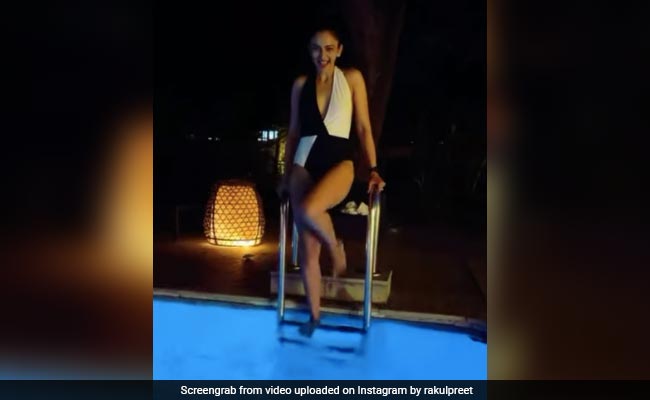 Rakul Preet Singh, who recently celebrated her 31st birthday, is busy dreaming of her ideal vacation scenario. One where she does not have to wear a mask and can chill by the pool. The actress posted snippets from her pool time on her Instagram profile on Wednesday morning. In the videos, Rakul can be seen flashing an ear-to-ear grin as she poses by the pool. The actress captioned the post: "Take me back to a mask free holiday." She accompanied the post with the hashtags #mood and #waterbaby. The post got a whole lot of love from her Instafam, who flooded her post with heart emojis.

This is what Rakul Preet Singh posted:

The actress started trending big time when she made her relationship with film producer Jackky Bhagnani Instagram official on her birthday. "Thank you my love ! You have been my biggest gift this year ! Thankyou for adding colour to my life, thankyou for making me laugh non stop , thankyou for being you ! Here is to making more memories together," she wrote.

The actress was last seen in Netflix's Sardar Ka Grandson. The film starred Arjun Kapoor and Neena Gupta in the lead roles. It also featured John Abraham and Aditi Rao Hydari in pivotal roles. Rakul Preet Singh signed Mayday last year. The actress will play the role of a pilot in the thriller-drama, which will be directed and produced by Ajay Devgn. The film also stars Amitabh Bachchan. She will also star in Doctor G, co-starring Ayushmann Khurrana. She recently wrapped Production 41 with Akshay Kumar.