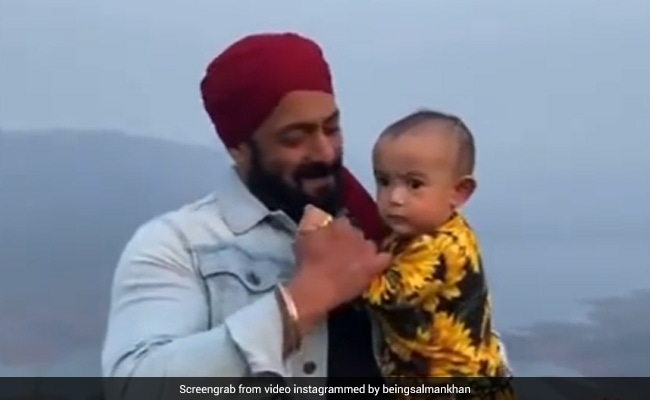 Salman Khan and Ayat in a still from the video. (Image courtesy: beingsalmankhan )

Seen Salman Khan and his little niece Ayat's latest video yet? It's awwdorable. On Friday evening, Salman Khan reshared a video posted by his sister Arpita Khan Sharma on Instagram and the clip shows him dancing adorably with his niece at an outdoor location. It appears that the video is from the sets of Salman Khan and Arpita's husband Aayush Sharma's new film Antim: The Final Truth as the actor can be seen sporting a turban in it. In the footage, Salman can be seen holding little Ayat in his arms and dancing with the track Tu Jo Mila from his film Bajrangi Bhaijaan playing in the background. Sharing the video, Arpita captioned it: "Unconditional love."

The clip has now gone viral on social media and we are not at all surprised. The actor's dance with his little niece is the cutest thing you'll see today.

Salman Khan shares his birthday with his niece Ayat. On the actor's 55th birthday in December, Aayush Sharma shared an adorable picture of Ayat with her mamu. In one of his previous posts, Salman Khan had shared a video of himself playing with little Ayat. Here's the post we are talking about:

In terms of work, Salman Khan was last seen in Dabangg 3. The actor has a couple of films lined up, including Radhe: Your Most Wanted Bhai and Kick 2. He completed the shooting schedule of Radhe last year in October and the film will now open in theatres on Eid this year.

The White Tiger: "So Incredibly Proud Of My Wife," Writes Nick Jonas For Priyanka Chopra