Team India is currently in England's Durham, gearing up for the five-match Test Series with England, which will begin on August 4 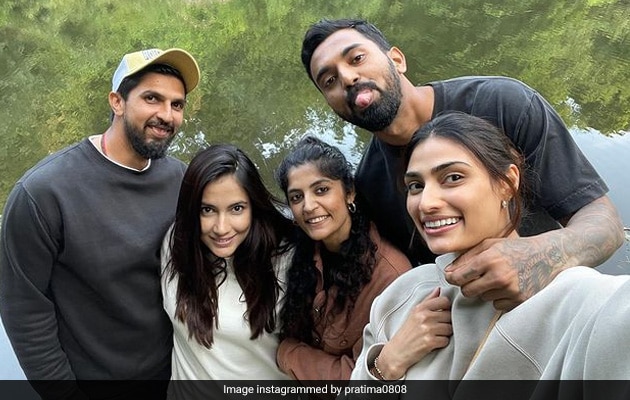 Athiya Shetty and KL Rahul are having a blast in England - we say this because they are filling up their respective Instagram feeds with snippets of their trip. However, they appear to be carefully avoiding sharing photos of themselves together. Meanwhile, they recently featured together in a postcard like entry shared by cricketer Ishant Sharma's wife Pratima Singh. The photo is a page out of Athiya Shetty and KL Rahul's England diaries with their friends. Team India is currently in England's Durham, gearing up for the five-match Test Series with England, which will begin on August 4 at the Trent Bridge in Nottingham. Team Captain Virat Kohli is also accompanied by his wife, actress Anushka Sharma.

In the photo shared by Pratima Singh, Athiya Shetty and KL Rahul can be seen posing with Ishant Sharma and Rajal Arora, Senior Producer of the BCCI media team. KL Rahul posted the heart icon on the photo of their happy faces.

Earlier, Athiya Shetty filled up her Instagram pages with these glimpses of her UK diaries:

In 2019, Athiya Shetty and KL Rahul began featuring in headlines for their speculated dating life with reports stating that the duo apparently began seeing each other since February of that year. Rumours were fanned on Athiya's birthday in November when KL Rahul shared an adorable birthday wish for her, making it Instagram official. They also recently featured in an advert together for a luxury eyewear brand.