Varun Dhawan is known for calling out speculative reports and tweets Actor Varun Dhawan has a zero-tolerance policy when it comes to speculative reports and tweets about his career and family members. He recently issued a warning against an Instagram account, claiming to be of his brother Rohit Dhawan's. In his statement, Varun clarified that Rohit Dhawan is not on the photosharing platform: "Hey guys, my brother Rohit Dhawan is not on social media. This is a fake account." Varun Dhawan and Rohit Dhawan and filmmaker David Dhawan's son with wife Laali Dhawan. While Varun is an actor, Rohit is a filmmaker and has directed films such as 2011 movie Desi Boyz and Kapow, released in 2016. Rohit Dhawan also worked as an assistant director in films such as Partner and Don. 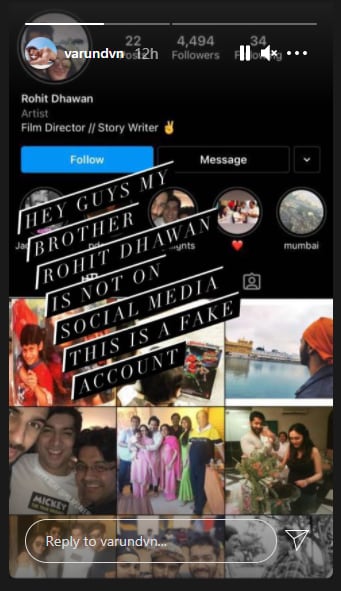 Varun Dhawan got married to his long-time girlfriend Natasha Dalal last month in a strictly guarded environment in Alibaug. Varun's brother Rohit Dhawan and his wife Jaanvi were spotted arriving at the Mansion House in Alibaug a few days before the wedding. Varun Dhawan and Natasha Dalal will reportedly host a reception in Mumbai some time later this month.

Earlier, Varun Dhawan dismissed an article about a speculative rift between him and his filmmaker father. "Maybe until I don't give you an interview you shouldn't write on my behalf sir," he tweeted.

Maybe until I don't give you an interview you shouldn't write on my behalf sir https://t.co/vJYLdyge83

In the past, Varun Dhawan has called out unwarranted reports about stepping out of the house during the lockdown, clarified speculation about a family function with Natasha Dalal and also schooled a Twitter user accusing him of flouting social distancing rules.