Urmila Matondkar (Remember Her?) Is This Actor's 'All-Time Favourite' 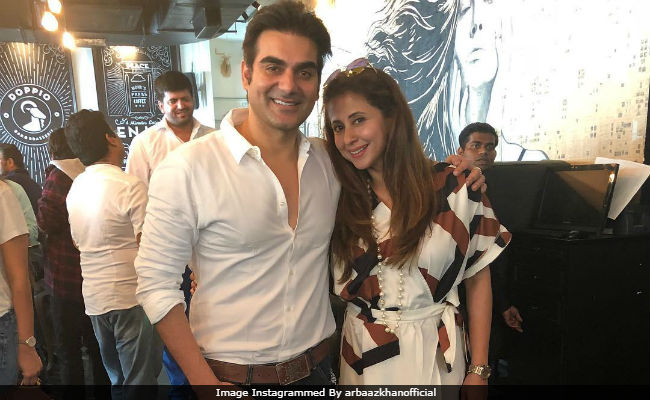 New Delhi: Actor-filmmaker Arbaaz Khan met Urmila Matondkar and posted a picture on Instagram with his 'all-time favourite.' The picture, which was shared by Arbaaz on Sunday evening, appears to be from a restaurant. "Met my all-time favourite @urmilamatondkarofficial. #Rangeelagirl #FanBoyMoment," Arbaaz captioned the post and also added a few lines from Urmila's famous song Tanha tanha yahan pe jeena yeh koi baat hai, from her 1995 blockbuster film Rangeela. Arbaaz and Urmila haven't worked in a film together. However, Salman Khan (Arbaaz's brother), co-starred with Urmila in Jaanam Samjha Karo, which released in 1999. Meanwhile, Urmila also shared a picture (minus Arbaaz) from last evening's outing. The picture features the actress with Kim Sharma, Atul Kasbekar and other friends.

Take a look at the pictures Arbaaz Khan and Urmila Matondkar posted.

A post shared by Urmila Matondkar (@urmilamatondkarofficial) on Mar 11, 2018 at 3:22am PDT

Promoted
Listen to the latest songs, only on JioSaavn.com
Urmila Matondkar, 44, is married to businessman Mohsin Akhtar Mir since March 2016. Apart from Rangeela and Jaanam Samjha Karo, she is known for films like Judaai, Satya, Mast, Khoobsurat, Pyaar Tune Kya Kiya and Bhoot. 2008's Karzzzz and EMI were two of Urmila Matondkar's last Hindi films. She was also a part of 2014 Marathi film Ajoba.

Arbaaz Khan, who was last seen in Tera Intezaar, opposite Sunny Leone, is currently working on the script of Salman Khan's Dabangg 3. The film will be produced by Arbaaz and directed by Prabhudeva. He was also starred in the previous Dabangg films and directed the second part. Sonakshi Sinha is also part of Dabangg 3, which goes on floors later this year.