The picture she shared are all things pretty 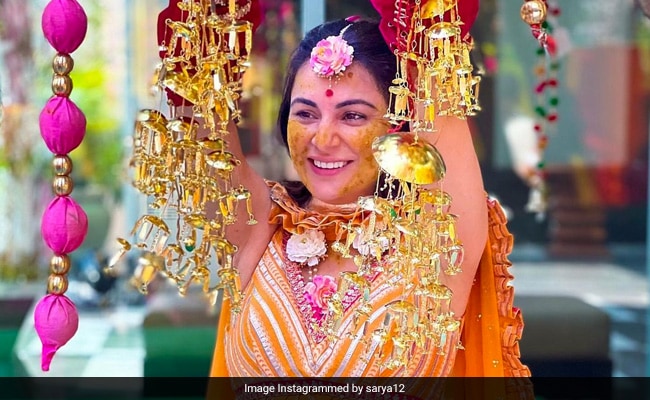 Actress Shraddha Arya, who is all set to get married tonight, shared pictures from her pre-wedding festivities and they are all things pretty. For her Haldi ceremony, the 34-year-old actress picked a yellow lehenga and acccessorised it with floral jewelry. She captioned the post: "D-Day." The actress is set to marry Delhi-based naval officer Rahul Sharma. Shraddha's friends from the television fraternity flooded the comments section with congratulatory messages. TV actresses Ankita Lokhande, Anita Hassanandani, Madhurima Tuli congratulated her. Singer Neha Kakkar and TV producer Ekta Kapoor also wished the bride-to-be.

Posting pictures from her mehndi ceremony earlier, Shraddha Arya wrote in her post: "The easiest yes I've ever said!" For the ceremony, she posted pictures of herself in a purple lehenga and jewellery, with henna on her hands. She also shared photos of the huge engagement ring on her finger.

Shraddha Arya is best-known for playing the role of Preeta Karan Luthra on the popular TV series Kundali Bhagya. She made her movie debut SJ Suryah's Tamil film Kalvanin Kadhali along with Nayantara. In terms of Hindi film, she starred in Nishabd, starring Amitabh Bachcchan and late actress Jia Khan. She was also a part of the Telugu film Godava with Vaibhav Reddy.