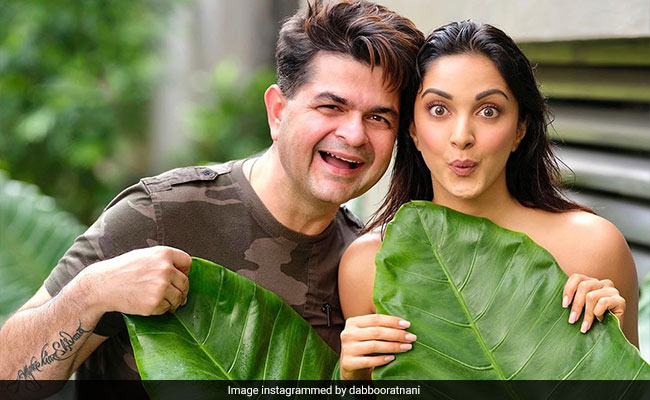 Remember Kiara Advani's shoot with foliage for Dabboo Ratnani's annual calendar that went viral? The photographer shared a BTS picture from the same shoot on his Instagram profile on Monday and it occupied a spot on the list of trends in no time. In the photograph, Dabboo can be seen posing with his muse Kiara. The Kabir Singh actress who sports minimal make-up, can be seen pouting for the camera. Sharing the picture on his Instagram profile, Dabboo wrote: "Beleaf in yourself. BTS with Dabboo."

Earlier, a section of the Internet pointed out that Kiara Advani's shot was quite similar to a photo shoot done by Marie Barsch and that it was "plagiarised." In response to which, Dabboo shared a throwback picture of a photo shoot done by him in 2002, in which Tabu could be seen posing behind a leaf. "If I can definitely repeat my own concept and if at all that doesn't go well with trolls, then I admit to plagiarising my own self," he wrote.

Kiara Advani, who was last seen in Netflix's Guilty, has several projects in her kitty, which include Laxmmi Bomb with Akshay Kumar, Bhool Bhulaiyaa 2, opposite Kartik Aaryan and Indoo Ki Jawani.