Tom Cruise shared footage of his going-to-the-movies-in-the-time-of-COVID stunt on his social media accounts in a post titled "Big Movie. Big Screen. Loved It" 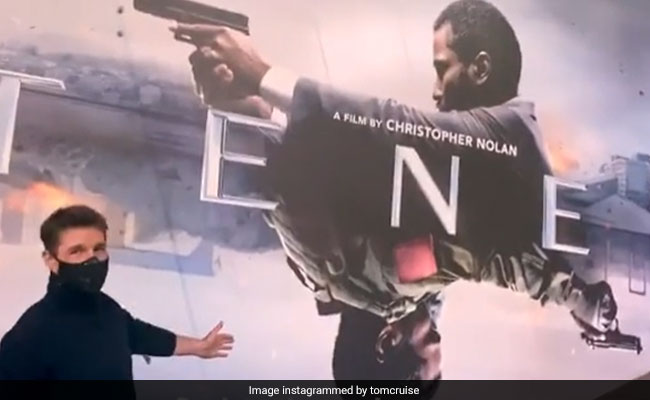 The Internet is currently obsessing over Tom Cruise who pulled the stunt of a lifetime by showing up announced at a London cinema to watch a screening of Christopher Nolan's Tenet, one of the first big movie releases in a world racked by COVID-19. As social media points out - it's just the sort of thing Tom Cruise would do. This is a man who climb skyscrapers and jumps out of planes for his films instead of leaving it to stuntmen as other, lesser, mortals do. Watching a film in a theatre filled with other movie-goers seems just the sort of mission: impossible that super agent Ethan Hunt would choose to accept.

So nobody was really surprised, when they had time to think about it, when Tom Cruise rocked upto an IMAX theatre in London in a black cab. Wait, what? Tom Cruise ditches planes and superbikes, takes a taxi? For those of little faith, he posted video of himself so the point is not moot. The 58-year-old actor wore a mask - be like Tom Cruise and wear a mask, people - and he sat in the audience with other people (one asked him how he liked the film on his way out and he said he loved it).

Tom Cruise shared footage of his going-to-the-movies-in-the-time-of-COVID stunt on his social media accounts in a post titled "Big Movie. Big Screen. Loved It." At least one person was super impressed by this public laughing in the face of danger - Ranveer Singh left a comment on Tom's Instagram post, writing, "Bless up, superstar! Back to the movies, love it."

Like us, some were struck by Tom Cruise's ride to the cinema.

Perhaps the most unsettling thing about this is the idea that Tom Cruise took a ride in a Taxi, like a person. https://t.co/IaVOrjIoqb

No plane this time, but that's okay. "Proof that Tom Cruise does all his own stunts" - if proof (more proof, we should say) was needed.

Proof that Tom Cruise DOES do all his own stunts. https://t.co/DjFVr7dOwP

Every year Tom Cruise pulls off a death-defying stunt, this summer it's attending a film during a Pandemic

-Holding his breath for multiple minutes
-Scaling the side of a 2,000+ foot building
-Dangling off the side of a moving plane
-Attending a packed theater amidst a pandemic https://t.co/1GFOTLk7og

The man who jumps out of planes, climbs the world's tallest buildings & throws himself into every cinematic stunt he can is not going to be put off by a virus https://t.co/r13tOUohFC

Can Tom Cruise save the world this time? The world of cinema, that is. An impossible mission, if ever there was one.

Love the idea that Tom Cruise, one of the most terrifyingly insane people I can think of, might influence me to behave like him. "Tom Cruise went to a packed cinema, and so can you!" OK babe, maybe watch some YouTube clips and get back to me

tom cruise demanding we all do our own stunts as he does https://t.co/xuhaBP9hgB

Tom Cruise is filming the next Mission: Impossible in London, in case you were wondering what he's doing there. He will play Ethan Hunt for the seventh time, with regular cast members Simon Pegg and Ving Rhames also returning. Rebecca Ferguson will reprise her role as Ilsa Faust for the third time. Mission: Impossible 7 is aiming for a November 2021 release - Tom Cruise will be seen before then in Top Gun sequel which was meant to have been this year's summer blockbuster but has been pushed to 2021 because of the pandemic.

Tenet, which seems to have been pushed out of the headlines by Tom Cruise's unexpected presence, stars John David Washington and Robert Pattinson in the lead roles. The cast includes Dimple Kapadia and Denzil Smith as well as Elizabeth Debicki, Kenneth Branagh and Michael Caine. Early reviews seem to agree that Christopher Nolan, director of Inception and Interstellar, has made his most mind-bending film yet.