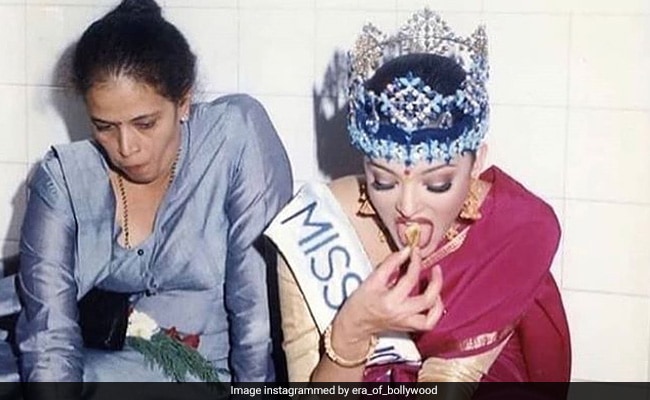 Aishwarya Rai Bachchan, who was crowned Miss World in 1994, has been trending on social media, courtesy a throwback picture from those days. In the photograph, the former beauty queen could be seen eating a meal with her mother Brinda Rai. Dressed in a pink saree, Aishwarya could also be seen wearing her Miss World crown as she enjoyed her food. The picture has been curated by several fan clubs dedicated to the actress on Instagram and is going insanely viral. TBH, we are not surprised at all, keeping into consideration the actress' massive popularity.

The Guru actress might not be very active on social media these days but her fan clubs have been sharing throwback pictures of Aishwarya back-to-back. Last week, the Internet chanced upon one helluva throwback picture from the Paris Fashion Week 2019, where the actress was accompanied by her daughter Aaradhya and singer Camila Cabello was one of the attendees.

On the professional front, Aishwarya Rai Bachchan was last seen in the 2018 musical Fanney Khan, co-starring Anil Kapoor and Rajkummar Rao, which was a box office debacle. She also dubbed for the Hindi version of Disney's Maleficent: Mistress Of Evil. She will next be seen inGulab Jamun, co-starring her actor-husband Abhishek Bachchan. The film will be produced by Anurag Kashyap.