This BTS Pic Of Kajol, Saif Ali Khan And Aditya Pancholi Was Clicked 23 Years Ago. Can You Guess The Film? 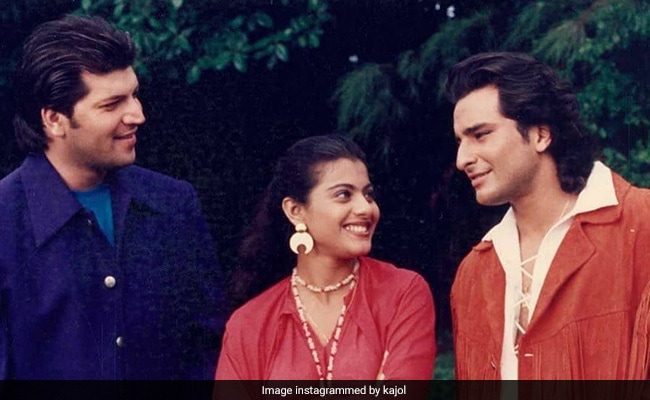 Kajol, in a throwback state of mind, shared a BTS picture from the sets of her film Humeshaa. In the picture, Kajol  can be seen happily posing with her film's co-stars Saif Ali Khan and Aditya Pancholi. In her caption, she revealed that the picture happens to be about 23 years old. The reason she chose to share the throwback was because the film clocked 23 years on Saturday. She wrote in her caption: "Throwback to 23 years ago, filming Hameshaa." Kajol accompanied the post with the hashtsgs #23YearsOfHameshaa and #Memories. Jannat actress Sonal Chauha left a comment on Kajol's post, which read, "Loved this movie ... You were fab as always."

Besides Kajol, Saif Ali Khan and Aditya Pancholi, the film also starred Aruna Irani and Kader Khan in pivotal roles. The film was directed by Sanjay Gupta. Other than Hameshaa, Kajol and Saif Ali Khan have co-starred in films like Yeh Dillagi and Bambai Ka Babu. Saif and Kajol were also co-stars in Tanhaji: The Unsung Warrior, also starring Ajay Devgn.

Kajol's next project is the Netflix film Tribhanga, which will mark her digital debut. Produced by Ajay Devgn, Tribhanga will be directed by Renuka Sahane and it will also star Tanvi Azmi and Mithila Palkar. The actress was last seen in the short film Devi.