​The actress shared a photo of herself in a red swimsuit. 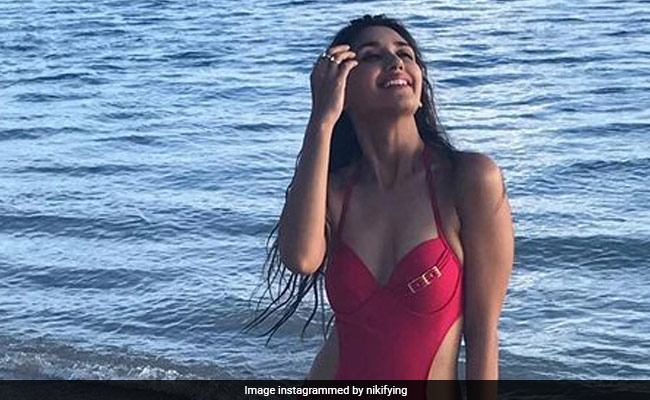 Actress Nikita Dutta is a breath of fresh air on social media with her real and honest posts about life and work. And now, it looks like she has spoken for those of us who have been skipping the gym for some time now. In her latest post, the stunning actress has shared a throwback photo of herself by the beach, posing in a bright red swimsuit. Along with the image, she has penned a note to her “bikini body” in the caption. She wrote, “Hey bikini body, we shall try and bring you back.” The actress mentioned in the hashtags that the photo was from 2017 but the caption, we have to say, echoes the mood of 2021.

Fans of the actress were in awe of the photo and filled the comments section with fire and heart emojis. Filmmaker Sabbir Khan reacted to the image with a “100” emoji.

We are sure that Nikita will soon be welcoming her “bikini body” given how fit she is. Recently, the actress shared a photo performing a yoga pose. Sharing the image, she wrote, “Saturday stretches. Natrajasana or the Lord Of Dance pose.” She added, “Great for stretching thighs, shoulders, thorax, and abdomen.”

Nikita also shared another set of pictures performing the “Hanumanasana” or “MonkeyPose”. In the caption, she said, “Thursdays are for splits and smiles.”

A while back, Nikita, who is an alumnus of St. Xavier's College, Mumbai, penned an emotional note about visiting the college as an actress. She wrote in the caption, “Just almost a decade ago, we kids used to look at vanity vans parked outside the college gate while a shoot was happening. Absorbed by our economics books and assignments, it was a different world.”

She further said, “Today, coming back to this place which has majorly contributed in giving me a direction in life feels surreal. Every little corner reminds me of the most eventful five years spent here. And the kid in me is even jumping with excitement to walk in without a strict dress code or an ID card hanging around the neck. Simply grateful for everything.”

Nikita made her Bollywood debut with Lekar Hum Deewana Dil. She also appeared in the 2019 film Kabir Singh, alongside Shahid Kapoor and Kiara Advani.

Milind Soman, Malaika Arora And Anusha Dandekar In A Picture-Perfect Selfie From The Sets Of Supermodel Of The Year 2