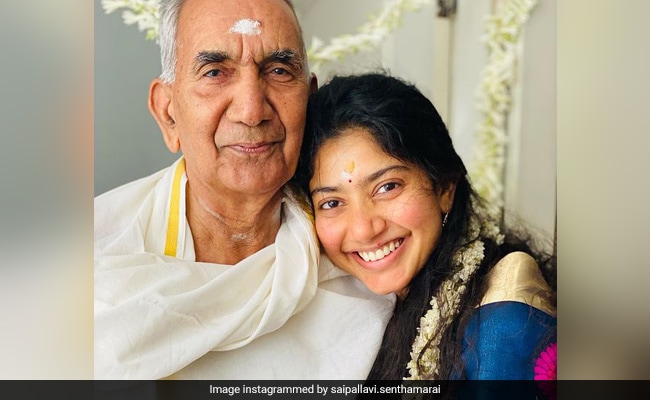 South actress Sai Pallavi celebrated her grandfather's 85th birthday on Monday and shared pictures from their celebrations that are all things nice. Sai Pallavi, who is known for her performances in films like Premam, Fidaa, Maari 2 and Paava Kadhaigal, looks every bit of beautiful in a blue saree with bronze border in the pictures. In one of the photos, she can be seen laughing while posing with her grandfather while in another, she can be seen smiling with all her heart with her grandmother. "Roots!! Thatha's 85th," the actress captioned her post. Sai Pallavi's post got a whole lot of love from her friends and fans. Actress Raashii Khanna commented "beauty" with a red heart icon and Sanya Malhotra dropped a heart eye and a red heart icon in the comments section.

"In the plastic beauty industry, Sai Pallavi is natural beauty," commented a user while another wrote: "Natural beauty queen." Other comments read "beautiful" and "cuteness overloaded."

Sai Pallavi, in June, shared some candid pictures of herself having fun with her friends and lit up Instagram. She can be seen sporting a crop top and jeans in the photos, sharing which she wrote: "When candid pictures chose to let me down...nevertheless I louvee them."

Sai Pallavi is the epitome of beauty and these pictures of the actress show us why:

In terms of work, Sai Pallavi has completed her degree in MBBS. Her breakthrough performance as an actress was in Alphonse Puthren's 2015 film Premam, which fetched her the Filmfare Award for Best Female Debut. Post that, Sai Pallavi featured in Kali, Fidaa, Middle Class Abbayi, Diya, Kanam and Padi Padi Leche Manasu.

In 2018, she starred opposite Dhanush in Maari 2. Their song Rowdy Baby became the first South Indian song to get 2 billion views on YouTube last year.

Sai Pallavi, who has also participated in a couple of dance reality shows, is also called the 'Dancing Queen' of the south film industry.