The Girl In This Pic Is A Happy Soul. Read Parineeti Chopra's Post To Know Why

"Thank you everyone," wrote Parineeti Chopra 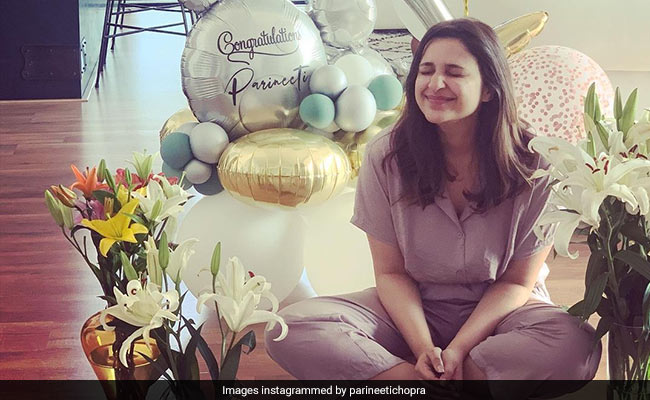 Parineeti Chopra woke up to a pleasant Monday morning. The actress, who recently starred in Netflix's The Girl On The Train, shared a happy picture on her Instagram profile. Dressed in a night suit, Parineeti Chopra can be seen sitting pretty, surrounded by balloons, flowers and her smile says it all. The actress received a whole lot of love from her fans and friends. Posting the pictures, she wrote: "The morning (weekend) after! Night suit and happiness." She summed up her current state with these two words: "Overwhelmed and emotional." She signed off the note saying, "Thank you everyone. #TheGirlOnTheTrain."

The Girl On The Train opened to mixed reviews from film critics. It is a Hindi remake of the Hollywood version that starred Emily Blunt in the lead role. The Hollywood film was an adaptation of Paula Hawkins' 2015 bestseller of the same name. The Bollywood version has been directed by Ribhu Dasgupta. The film, also starring Aditi Rao Hydari and Kirti Kulhari, showcases the life of Mira Kapoor, an alcoholic, who suffers from amnesia. The story is centered around murder, obsession, jealousy and high-octane thrill.

Parineeti Chopra has a busy year ahead what with films like Sandeep Aur Pinky Faraar, co-starring Arjun Kapoor, and the Saina Nehwal biopic lined-up. She will also stars in Animal, alongside Ranbir Kapoor and Anil Kapoor. The actress has featured in films such as Golmaal Again, Hasee Toh Phasee, Ishaqzaade and Kill Dill to name a few. Parineeti made her Bollywood debut with the 2011 film Ladies vs Ricky Bahl.

Parineeti ChopraThe Girl On The Train

The Gang's All There In Kareena Kapoor's Pre-COVID Pic. Just One Question...