The Backstory To Amitabh Bachchan's Knotted Shirt Look In Deewar 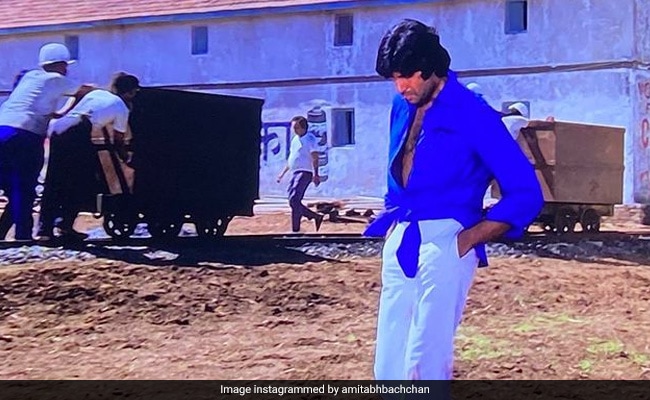 Recalling old times, Big B shared a still from the film featuring him in the iconic look. In the caption of the post, he shared that the knot in his shirt was never a part of his on-screen character and it just resulted from a tailoring error. "Those were the days my friend.. and the knotted shirt.. it has a story.. first day of shoot.. shot ready.. camera about to roll.. and the discovery that the shirt has been made too long - beyond the knees.. director could not wait for another shirt or a replaced actor.. so tied it up in a knot and," Amitabh Bachchan wrote in the caption of the post. Many fans of the actor dropped comments on his post.

Amitabh Bachchan is one of the most active celebrities on social media. The actor keeps entertaining his Instafam with new and old pictures every now and then.

Recently on Father's Day, Big B shared an unseen monochrome picture of himself and his late father, poet Harivansh Rai Bachchan. Keeping the caption simple, the actor just wrote: "FATHER."

The actor also gave us a glimpse of his most adorable co-star from one of his recent projects. He shared a picture of himself and a golden retriever dog on Instagram and wrote: "My co star at work .. when he's on set the whole atmosphere changes .. that is why they are man-woman's best friend."

In terms of work, Amitabh Bachchan has numerous projects lined up for him. He will soon be seen in Rumi Jaffery's Chehre, co-starring Emraan Hashmi. He will also be seen in Ayan Mukerji's Brahmastra. The actor recently joined the cast of the Hindi remake of Hollywood film The Intern. He will be seen alongside Deepika Padukone in the film.