"Whether it is one slap or other acts of domestic violence, it all comes from a place of disrespect and discrimination," said Taapsee 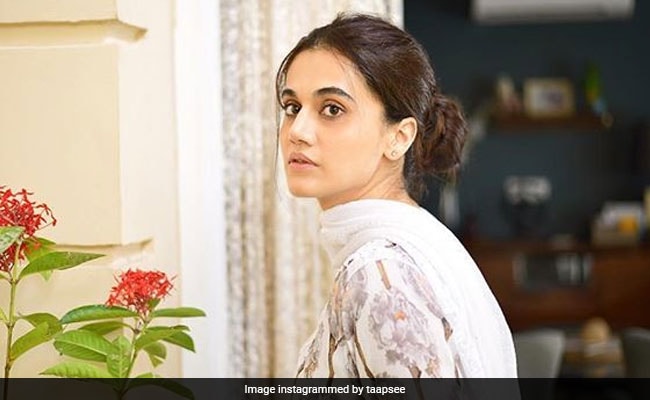 Actress Taapsee Pannu is gearing up for her upcoming release Thappad, and she asserts that the act of slapping amounts to violence, disrespect and, to an extent, a controlling nature, whether it involves a parent and a child, or husband and wife, reported news agency IANS. She adds that a slap can never be an expression of love, ever. "I think no one takes a stand against the disrespect of women, including women themselves. Standing up against it is the need of the hour. Women who are living in poor economic condition cannot stand up because of their conditioning and financial dependency on their spouses. They have no place to go and they do not earn money, so they deal with disrespect and torture every day. In elite society, they refuse to address the issue only because they look at it as social embarrassment and (feel that) it hampers their image of a perfect family!" Taapsee told IANS.

She added: "The fact is, whether it is one slap or several more slaps or other acts of domestic violence, it all comes from a place of disrespect and discrimination. There is nothing called a slap out of love. No, never!"

Thappad revolves around a young couple and how one day the husband slaps his wife in front of guests at a house party. The wife decides to walk out of the marriage.

The Pink actress believes the first introduction to violence happens through parents and it gets normalised by them. Therefore the actress emphasised on sensible parenting. "A kid is slapped by an elder because of the elder wants to create fear in the child's mind, because the child is comparatively weak. It is the wrong style of parenting. Since childhood, the human mind learns to normalise a few acts of physical violence like slapping or raising a hand. In adulthood, men especially use the same habits to control people. It is a cycle and we need to question it," she said.

Taapsee did a dozen-odd glamour roles in southern commercial films before Pink changed the tide of her career in 2016 and she carved her image as a serious actress in Bollywood. In a short time, she has crafted for a "no-nonsense" image on and off the screen with films like Naam Shabana, Soorma, Mulk, Badla among others.

Taapsee said that playing the protagonist Amrita in Thappad was a huge challenge. "The character Amrita was suffocating for me in the end and I took it as a challenge. After 15 days of shooting, I started feeling claustrophobic. It was tough for me to get out of my firebrand image and mind-space and get into the skin of this character," she said.

She describes Amrita as a "good-hearted, loving and homely girl," who finally decides to walk out of a relationship that she invested all her emotions in. "She took all the typical nonsense of 'girls should compromise,' 'little physical violence is part of love,' 'and girl should do everything to save the marriage.' As Taapsee, I cannot take such no-sense at all. So, emotionally I was feeling claustrophobic," she shared.

Directed by Anubhav Sinha, Thappad is scheduled to release on February 28.

(Except for the headline, this story has not been edited by NDTV staff and is published from a syndicated feed.)
Comments
taapsee pannuthappadtaapsee pannu thappad movie