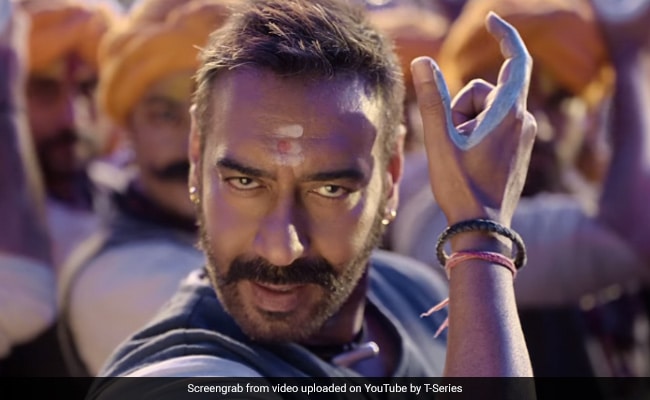 Shankara Re Shankara: Ajay Devgn in a still from the song. (Image courtesy: YouTube)

The song Shankara Re Shankara from Tanhaji: The Unsung Warrior released on Monday morning and it will definitely wake you up. The song features film's lead actor Ajay Devgn and Saif Ali Khan, who plays the antagonist in the film. The video begins with Ajay Devgn saying, "Dushman ko harane se pehle, dushman ko dekhna chahta hun (want to see the enemy before defeating him)." Throughout the course of the video, Ajay Devgn challenges Saif Ali Khan with his words. It wouldn't be wrong to say that the Ajay Devgn's intensity and Saif Ali Khan's animated expressions are the highlights of the song Shankara Re Shankara.

Shankara Re Shankara has been sung and composed by Mehul Vyas and the lyrics are by Anil Verma. Sharing the song on social media, on Monday, Ajay Devgn wrote: "Danke ki chot par bajega ek hi naara,."

Tanhaji: The Unsung Warrior has been directed by Om Raut and it has been co-produced by Ajay Devgn and Bhushan Kumar. The film is slated to hit the screens on January 10, next year. The film also stars Pankaj Trpathi, Sharad Kelkar, Luke Kenny and Neha Sharma in pivotal roles.