Kapil Sharma shared a video on his Instagram with this caption: "Corruption is everywhere" 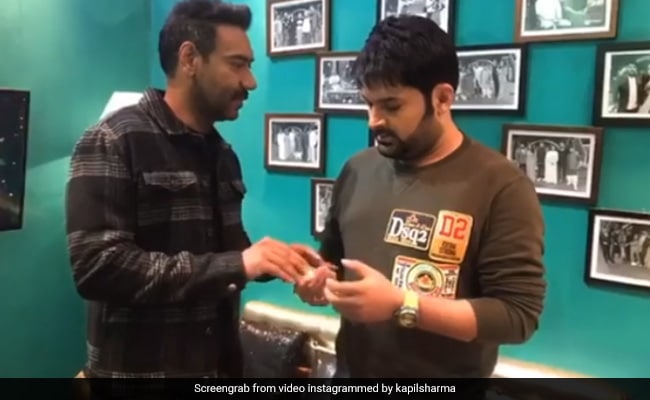 Ajay Devgn recently dropped by on the sets of The Kapil Sharma Show, which is perhaps when the idea of making the now-viral video struck the two. The video begins with actor-comedian Kapil Sharma talking Ajay Devgn's upcoming period piece Tanhaji: The Unsung Warrior. He then goes on to request his viewers to watch Ajay Devgn's film when it releases in theatres in January. Just when he's done, enters Ajay Devgn, who tells the camera person to stop recording - "Zara bandh karna" - but the camera continues to roll anyway. Ajay Devgn hands over some money to Kapil Sharma in an attempt of mock bribery, which is a sarcastic take on the concept of paid promotions. Kapil also actively participates as he claims the deal was set for Rs 1,200. Ajay Devgn, unable to dig out more cash from his pocket, walks out of the camera.

Kapil Sharma shared the video on his Instagram with this caption: "Corruption is everywhere" and just to confirm all of this was in good humour, added the hashtags "comedy, fun, laughter" in the end.

Earlier in 2016, Ajay Devgn and a prolonged public feud with self-styled film critic Kamaal R Khan over whether or not KRK was paid to tweet about Karan Johar's film Ae Dil Hai Mushkil, ahead of its box office clash with Ajay Devgn's Shivaay. Karan Johar and Ajay Devgn eventually made up for their fall-out, after which Ajay and Kajol featured on KJo's The Koffee With Karan last year.

Meanwhile, Ajay Devgn also released the second trailer of Tanhaji: The Unsung Warrior on Monday, in which he features in the titular role. Kajol portrays the role of Tanaji's wife Savitribai Malusare in the movie. Watch the trailer here:

Directed by Om Raut, Tanhaji: The Unsung Warrior will release in 3D and is slated to hit screens on January 10, 2020, when it will clash with Deepika Padukone's Chhapaak.

How Madhuri Dixit Is "Making The Most" Of The Coronavirus Quarantine