Swara Bhasker's Maangtika Is At Least 65-Years-Old. It Belonged To Her...

"My Nani was born in Benaras. At the age of 15; in 1956 she was married to a suitable young Naval officer from a Zamindari family of Bihar," Swara Bhasker wrote about her nani. 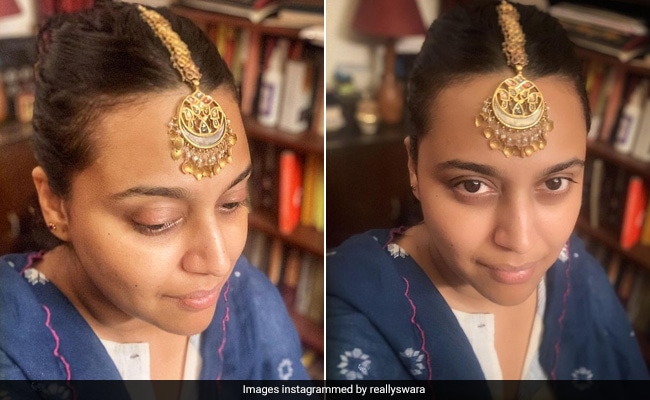 Swara Bhasker had quite an emotional morning on Thursday, remembering her nani. The 33-year-old actress shared glimpses of an heirloom piece of jewellery she inherited from her maternal grandmother. It's the maangtika which Swara Bhasker's nani wore on her wedding day - she was just 15. Swara Bhasker attached an emotional note to her post, writing about what made her nani special and how lucky she is to have received "A piece of my Nani": "My Nani was born in Benaras. At the age of 15; in 1956 she was married to a suitable young Naval officer from a Zamindari family of Bihar. By the time she was 24 she'd had all her 4 children. She only studied till Class 8; but encouraged and supported all her children to study- go abroad and study. 'All four of my children are Ph.D' was her proudest boast."

Swara Bhasker, who lost her grandmother a few years ago, added: "By the time she died in 2017; she had been married 61 years. When she dressed as a bride again, it was to make the journey from her home to the funeral pyre. There could not be a more committed wife, mother and grandmother than her. Or perhaps all our grandmothers were. That's all they were taught. My nani made sure her daughters would not be constrained by marriage and motherhood the way she was. She was an enabler like no other. After she passed her jewellery was passed on to her 3 daughters, 5 granddaughters and 1 daughter in law. I kept this 'maangtika' that adorned her head as a child bride. It's a bittersweet reminder of her life. It's a piece of my Nani."

On her grandmother's birth anniversary this year, Swara Bhasker remembered her with this post: