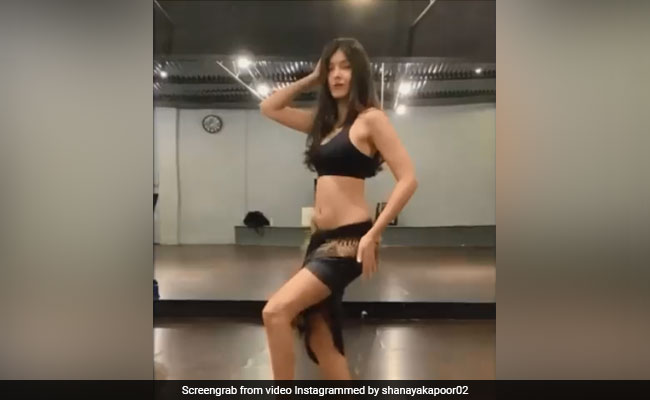 Shanaya Kapoor in a still from the video. (courtesy shanayakapoor02)

Shanaya Kapoor takes her belly dance classes very seriously but a little fun never hurt anyone, right? Well, that is exactly what Shanaya can be seen doing in her latest Instagram video. The video features Shanaya dancing her heart out along with her instructor Sanjana Muthreja. The video sure does have a share of a few oopsie moments but they are all things fun. Shanaya Kapoor captioned the post: "BTS fun with Sanjana Muthreja (Clearly couldn't balance properly. Hehe)." She accompanied the post with the hashtag #drumsolo. The track Dancing Is What to Do plays in the backdrop.

A few days ago, Shanaya posted this perfect belly dance video on her Instagram profile and she captioned it: "Even though I didn't breathe for 60 seconds straight, I always have the best time doing a drum solo with Sanjana Muthreja."

ICYMI, check out the video here:

Remember the dance video, where Shanaya "tried something different with Sanjana Muthreja?" She wrote, "Thanks for letting me steal your skirt Suhana Khan."

Shanaya Kapoor, daughter of Bollywood actor Sanjay Kapoor and jewelry designer Maheep Kapoor, stepped into Bollywood with the 2020 Netflix film Gunjan Saxena: The Kargil Girl, which featured her cousin Janhvi Kapoor in the lead role. Shanaya began her career as an assistant director with that film.

Shanaya Kapoor also made cameo appearances in in Netflix's smash hit The Fabulous Lives Of Bollywood Wives. She came into the limelight when she made her debut at the Le Bal in Paris in the year 2019.

Mira Rajput Reveals She Has A Crush On This Celeb. No, It Isn't Shahid Kapoor