The picture caught the attention of fans on Instagram 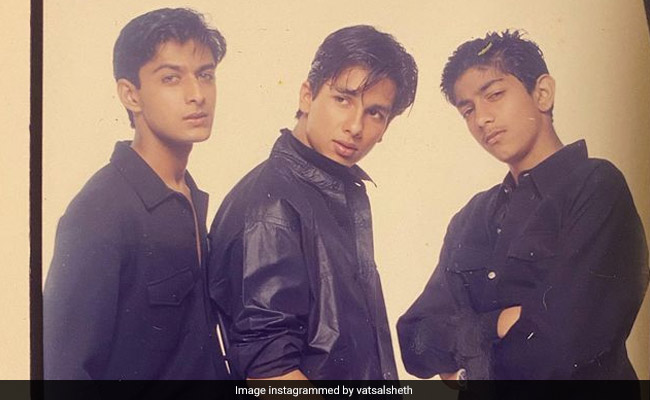 Throwback pictures are always a pleasure to look at. And bringing you the throwback photo of the week is actor Vatsal Sheth. In the image, a young Vatsal Sheth is sharing screen space with an equally young Shahid Kapoor. Seen with an unnamed third man, the trio is dressed in sleek black shirts and matching pants. Sharing the image, Vatsal wrote, “Blast from the past… Shahid Kapoor, remember this?” tagging the actor. While Shahid Kapoor is looking away from the frame, Vatsal is looking straight at the camera. Fans of the actors flooded the comment section with heart emojis. “Omg, handsomes in one frame!” said one user.

And, this is not the only throwback photo on Vatsal Sheth's timeline that has captured the Internet's attention recently. In one of his recent uploads, he is seen with none other than Bollywood superstar Shah Rukh Khan. Sharing the images, Vatsal Sheth said, “It was October 2000 …Nervous as hell (you can see it in my face) couldn't believe being in the same frame with the superstar, Shahrukh Khan…Shahrukh bhai talked me through it and made me very comfortable during the shoot…Can't thank him enough for helping a super nervous kid out. One of the best experiences of my life, those memories are still so fresh and will cherish them all my life.”

Meanwhile, Shahid Kapoor too often shares throwback pictures on Instagram. Recently, on the occasion of Mothers' Day, the actor shared a picture of his mother Neliima Azeem. He also penned a sweet note for his mother and wrote, “She is always the wind beneath our wings. Her gaze is loving and forgiving and always sees us as the best version of ourselves. She has nurtured us with so much love that we are capable of passing it on and spreading it into the world. Being the older one by almost 14 years my bond with mom has been very unique, like a friend. And our journey has been beyond words. There is no one who can be you, mom.”

We also get to see glimpses of Shahid Kapoor's throwback pictures on his brother Ishaan Khatter's timeline. Take, for instance, this picture of a young Shahid Kapoor holding baby Ishaan in his arms.

On the work front, Shahid Kapoor was last seen in Kabir Singh. His upcoming projects include Jersey as well as a web series, directed by Raj and DK. Meanwhile, Vatsal Sheth is seen in films such as Taarzan: The Wonder Car, Heroes,Jai Ho, and television shows such as Ek Hasina Thi and Haasil, among others.