Seen This Pic Of Jacqueline Fernandez And John Abraham From The Sets Of Attack?

"Attack back with the awesomest John Abraham," wrote Jacqueline Fernandez 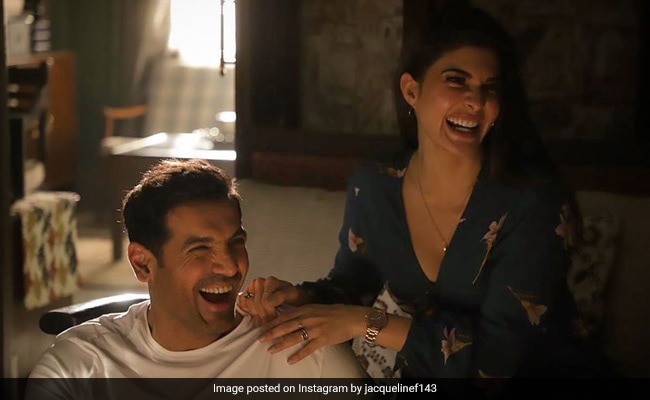 John and Jacqueline on the sets of Attack. courtesy jacquelinef143 )

Jacqueline Fernandez shared a brand new picture from the sets of her forthcoming filmAttack along with her co-star John Abraham on her Instagram profile, on Tuesday. In the pictures, the co-stars can be seen smiling with all their hearts. Jacqueline captioned the post: "Attack back with the awesomest John Abraham." Attack is John and Jacqueline's fourth film together. The duo have earlier co-starred in the 2012 film Housefull 2, the 2013 film Race 3 and Dhishoom (2017).

#attack back with the awesomest @thejohnabraham

Attack  is being directed by Lakshya Raj Anand and it is collaboratively being produced by Pen Studios, JA Entertainment and Ajay Kapoor. Sharing the first look of his film Attack in December last year, John Abraham wrote: "Excited to share the release date of my film Attack. Written and directed by Lakshya Raj Anand, the film will release worldwide on August 14, 2020."

Excited to share the RELEASE DATE of my film, ATTACK. Written & Directed by Lakshya Raj Anand, the film will release worldwide on 14th August, 2020. Happy to partner with pic.twitter.com/MFTXhXq4tE

On the work front, Jacqueline Fernandez was last seen in Netflix's Drive, co-starring Sushant Singh Rajput. The actress has also been roped in for Netflix crime thriller Mrs Serial Killer, which will mark her digital debut. Directed by Shirish Kunder, Mrs Serial Killer will be produced by Farah Khan. The actress has reportedly also signed Kick 2, opposite Salman Khan. However, she has not announced her association with the project yet.