Like last year, this year too Sajid Khan roped in Salman Khan for the birth anniversary celebrations of the late composer 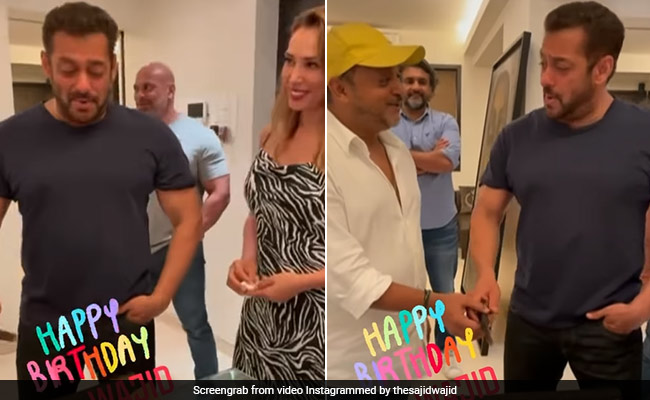 Salman Khan remembered late composer Wajid Khan on his birth anniversary this year with a cake cutting session. Composer Wajid Khan, of Sajid-Wajid duo, died in June last year. Like last year, this year too Sajid Khan roped in Salman Khan for the birth anniversary celebrations of the late composer. This time, Salman Khan was also joined by Iulia Vantur, who the superstar is rumoured to be dating. On Instagram, Sajid Khan shared a video from the cake cutting session and dedicated an emotional note to his late brother and wrote: "Kaise bataye kisko sunaye kitna tumhe hum chahte hai. We love you Wajid, the world loves you."

In the video, Salman Khan and Sajid Khan dedicates the song Happy Birthday to Wajid Khan as they share the cake. Iulia Vantur can be seen joining the celebrations - she makes brief appearances in the video.

Last year, Salman Khan and his brother Sohail paid tributes to late composer Wajid Khan on his birth anniversary by cutting a cake:

Wajid Khan was Salman Khan's long-time collaborator and friend. The composer duo began their journey in Bollywood as music composers with Salman Khan's 1998 film Pyaar Kiya To Darna Kya and continued to work with the actor throughout their career, composing songs for his films. After Wajid Khan's death in June last year, Salman Khan tweeted this emotional message: "Wajid, will always love, respect, remember and miss you as a person and your talent. Love you and may your beautiful soul rest in peace."

Sajid-Wajid composed songs for Salman's movies such as Partner, Welcome and the Dabangg series of films. Wajid Khan was also the voice of Salman Khan songs such as Soni De Nakhre, Do You Wanna Partner, Bang Bang Bang, Love Me, Taali, Mashallah, Baaki Sab First Class Hai, among others. Wajid Khan, along with brother Sajid, composed the two songs Bhai Bhai and Pyaar Karona for Salman Khan, who released them during the lockdown last year.