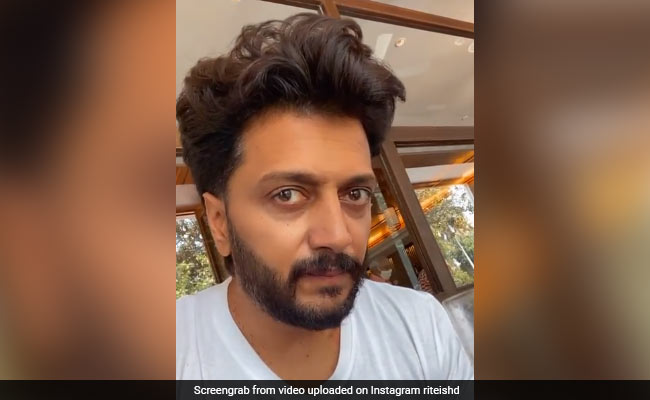 Riteish Deshmukh in a still from the video. (Image courtesy: riteishd)

Actor Riteish Deshmukh always wakes up early. The actor revealed why he just cannot afford to wake up late in his new Instagram Reels. In the funny video, a voice can be heard asking Riteish, "Aap jab subah late uthte ho, toh aapko khaane mei kya milta hai? (What do you get to eat for breakfast when you wake up late in the morning?)" To this Ritiesh replies, "Chappal (A whacking)." The actor is seen sipping on some juice and is wearing a white T-shirt. He captioned the video, "Good Morning."

The funny clip had the 42-year-old actor's followers in splits. Actress Ameesha Patel wrote, "Hahahaha...Love the expressions." Laughter and heart emojis dominated the comments section. One fan said, "You are the funniest, sir."

Riteish has been acing the Reels game for some time now. He regularly uploads such fun videos. The actor is often also accompanied by his wife, actress Genelia D'souza in these clips. A recent upload by the couple left fans laughing and asking for more. In the clip, the actor can be seen mouthing the line, "Yaar, headache ho raha hai (My head is hurting)." To this Genelia asks, "Kaha pe? (Where)." The camera then pans to a Riteish who looks visibly shaken by the absurdity of the question. The song Bhagwan Hai Kaha Re Tu from the film PK, asking for God's intervention, plays in the background adding to the humour.

Recently, Riteish hosted the Filmfare awards alongside actor Rajkumar Rao. He treated fans to some fun Reels from the event. Take a look.

Making a joke on himself for not being nominated for any award this year, Riteish posted a video where he was seen mouthing lines from Snoop Dogg's famous Hollywood Walk of Fame acceptance speech. "Last but not least, I want to thank me," Riteish says.

While the video was loved, many also said that he did not need an award as he was always a fan favourite. "Sometimes awards aren't recognition of talent...! It's the love, respect that you receive from other people," one fan wrote.

Riteish Deshmukh was last seen in Baaghi 3. He will next feature in Housefull 5 and Nagraj Manjule's film based on the life of Chhatrapati Shivaji Maharaj.