Red Notice Review: The most expensive film ever to stream on Netflix, the action-adventure comedy is racy, even diverting in parts, but all things factored in, it never rises above its surface glitz and gloss. 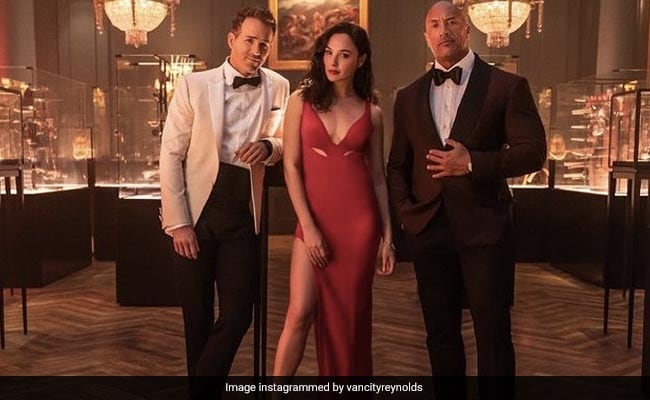 Red Notice: A still from the film. (courtesy: vancityreynolds)

Enormous star power? Yes. Massive budget? Yes, that too. But is the payoff commensurate with the scale and sweep of the production? The answer, sadly, is no. Red Notice, out on Netflix, is a movie that sports shimmering trimmings but, in terms of substance, swims in shallow, stagnant waters.

The trouble with chasing superficial thrills of the kind that Red Notice packs into its two hours is that no matter how grand the film looks and how full of energy the principal cast (Dwayne Johnson, Ryan Reynolds and Gal Gadot) is, the ripples that it generates are as mighty as little soap bubbles. Poof, they're gone before they even begin to float!

For all the spectacular sets and locations and the visual flair (thanks to cinematographer Marcus Forderer), Red Notice swivels on a precariously rickety axis that can barely hold its own weight, let alone the burden of what aims to be a star-studded blockbuster. Individually and collectively, the three main actors add all they can to the vapid venture but the huffing and puffing they do is eventually just that: huffing and puffing.

The most expensive film ever to stream on Netflix, the action-adventure comedy is racy, even diverting in parts, but all things factored in, it never rises above its surface glitz and gloss. The plot hinges on art heists and con artists. But forget the art part of it, even the artifice in Red Notice borders on the laboured.

From ancient Egyptian artifacts of secret provenance to Nazi-era loot tucked away in a faraway jungle, from an action sequence in a cavernous hideout under a bull ring to an escape from a high-security Russian prison, from a heist in a museum in Rome to a robbery in a vault room in Valencia, Red Notice hops from one set piece to another without ever finding a cohesive core sturdy enough to hold it together.

Written and directed by Rawson Marshall Thurber, Red Notice revolves around an FBI agent and two art thieves out to outwit each other. Rome, Bali, London, Russia, Cairo, Argentina: the trio flies from one place to another in pursuit of each other - and of a priceless work of art believed to be missing for many decades. One twist, then another, then yet another (and then... it's time to stop counting) pile up in an unabashedly pulpy plot that never settles into a steady rhythm. It is only apt that Red Notice kicks off inside the cylindrical Castel Sant'Angelo in Rome: the rest of the film weaves circles around a thin premise.

The character played by Johnson enters the circular building in the company of Interpol's Inspector Urvashi Das (Ritu Arya) to prevent the theft of a precious objet d'art housed there. The operation does not yield the desired result. It sends them all, including the thief and the cop, on a wild goose chase across the continents.

Special Agent John Hartley (Johnson, in his third collaboration with Thurber after Central Intelligence and Skyscraper) is on the trail of wanted thief Nolan Booth (Reynolds). The two men face off right at the outset. A foot chase through the galleries of the museum and the streets of Rome ensues when Hartley, with the aid of a fizzy drink, proves that the feared theft has already been committed.

Booth, after describing Hartley as "a slow bald guy", fires a question at him: "Where did you get that jacket from? It's a statement piece." The latter is, of course, in no mood for bonhomie. You're without a badge and a gun and are outside your jurisdiction, Booth says. "I don't need a badge," Hartley shoots back. "I have a gun."

Sure enough, neither the gun nor the cockiness Hartley exudes is of much use. The criminal takes to his heels. Hartley gives hot pursuit and, as the tables turn, finds himself becoming a reluctant accomplice of his quarry. The two men aren't, however, a match for a wily woman called The Bishop (Gal Gadot), who invariably goes one better than the unlikely pair.

The Bishop is Booth's sworn rival and the world's number one art thief by a considerable margin. But what is all the hullabaloo about? A dry, documentary-style introductory voiceover fills us in with the context even as the credits flash on the screen. The tragic love story of Antony and Cleopatra is known across the world, the voice says. What isn't known is that the Roman general had gifted three bejewelled 18-karat gold Eggs to the Egyptian Queen on their wedding day.

These Eggs - the first is in the museum where the film opens, the second is in a private collection and the third is lost in the mist of time - are what The Bishop and Booth want to grab. In the battle of wits that they wage, one that Hartley joins, one man who has to be hoodwinked is an arms dealer named Sotto Voce (Chris Diamantopoulos).

Is there one thing that binds the four key figures together? There is: their drawbacks and strengths alike stem from their respective fathers. The Bishop tells someone that her dad was always focused on winning. "I am what I am because of him," she says.

Booth's father was a Swiss police captain, an "unlikeable" man. Hartley's was worse. "I don't talk about my dad," he says. The one who gets more than a sentence in about his papa is Sotto Voce. "He was a man of conviction," he says and goes on to reveal that his old man's life did not end on a happy note.

Johnson, Gadot and Reynolds spare no effort to do what they are good at, and they spar with each other with all their might, but that does not serve the purpose of raising the game above the level of a scattershot crime thriller that flounders after a promising start. Reynolds does whip up some comic energy along the way and Johnson is at times a nice foil in the odd-couple skirmishes that two men have. But it does not last the distance. Gadot is fetching enough as a woman who is ultra -proficient in the art of seduction, but she is definitely no Wonder Woman here.

In the supporting cast, Ritu Arya makes the strongest impact. Playing an Interpol officer who gives the FBI man a run for his money, the British actress sails through with impressive elan. Red Notice promises the world but doesn't quite deliver. It banks far too heavily upon three of Hollywood's most saleable stars and that is the movie's biggest undoing. It flatters to deceive.