Rakhi 2018: Both Sara and Soha have shared priceless memories from the Rakhi celebrations, which are bound to go up on their memory wall 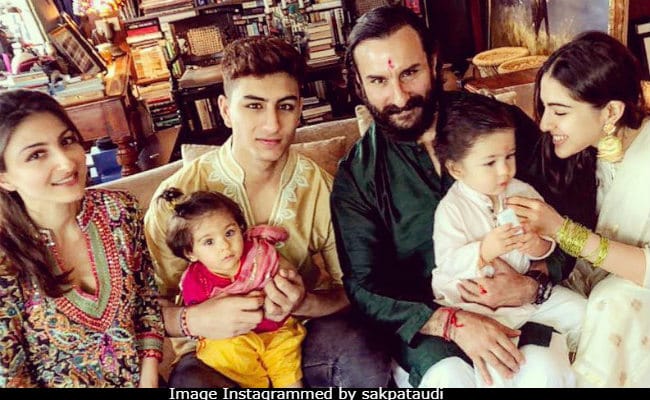 Looks like Taimur had a great Rakhi (courtesy sakpataudi)

Taimur Ali Khan was the star of the Raksha Bandhan celebrations at Saif Ali Khan's residence on Sunday. Sara Ali Khan and Ibrahim Khan (Saif's children with his first wife Amrita Singh) dropped by for the Rakhi festivities while Saif's sister Soha Ali Khan's plus one at the festivities included her daughter Inaaya. While Soha and Saif were busy with the Rakhi rituals, there was a case of cuteness overload in one corner of the house. Inaaya, who will celebrate her first birthday in September, tied a Rakhi to baby Taimur, making way for multiple adorable photos, which are way too cute to handle. Meanwhile, Sara, also showered Rakhi blessings on Taimur. On Soha's Instagram, we also spotted a rakhi on Ibrahim's wrist, courtesy Inaaya. Awww.

Both Sara and Soha have shared priceless memories from the Rakhi celebrations, which are bound to go up on their memory wall. Do you see how both Inaaya and Taimur are dressed in traditional? Can't deal.

Happy rakhee boys and girls #rakshabandhan be good to one another !

The bond one shares with their brother is unique. Sometimes, he understands you better than you do. When you re lost, he always shines a light in the right direction. He gives you the courage to take on the world. Your relationship is unbreakable, just like a diamond. And today, I'm proud that my brother is mine and we are strong together. #RealisRare #RealisaDiamond #BrothersWillBeBrothers #HappyRakshabandhan #Bond #Sisters #Brothers #Siblings #BrotherSisterLove #MyDiamondStory @realisadiamond_in

The photos Instagrammed by Soha are accompanied by cute little captions. For example, for a photo of Taimur and Inaaya bonding, this is what she wrote: "Hey you got a little something in your eye - oh wait, it's my finger!"

Hey you got a little something in your eye - oh wait, it's my finger !

If you think that was it, hold on. Taimur also celebrated Rakhi with his maternal cousins - Karisma Kapoor's children Samiera and Kiaan Kapoor. Karisma Instagrammed photos from the festivities, in which Taimur can be seen perched on his maasi's lap while Samiera ties a rakhi. "Precious bonds," she captioned the photo.

Baby Inaaya is just nine months younger to cousin Taimur and was born in September last year while Kareena and Saif welcomed Taimur in December 2016. Inaaya and Taimur, along with the two set of parents - Soha Ali Khan and Kunal Kemmu and Kareena Kapoor and Saif Ali Khan respectively, are also often photographed catching up for fam-jams at Soha's Mumbai home.

Meanwhile, Sara Ali Khan is all set for her Bollywood debut with films like Ranveer Singh's Simmba and Sushant Singh Rajput's Kedarnath in the pipeline.