"Pilates Girl" Janhvi Kapoor Began Her Weekend Like This

Fitness trainer Namrata Purohit captioned her post: "And she's properly back at it" 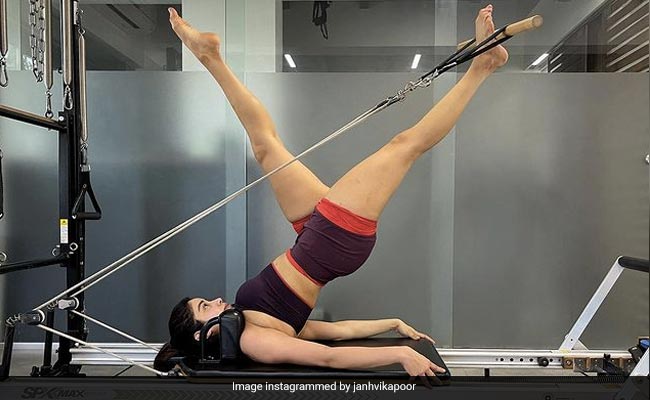 Janhvi Kapoor stepped into the weekend with some fitness routines. On Saturday morning, she shared pictures from her Pilates session on her Instagram profile. Janhvi Kapoor added a couple of emojis along with her post. The Dhadak actress' fitness trainer and friend Namrata Purohit too shared the same pictures from the session. Namrata Purohit captioned her post: "And she's properly back at it. My Pilates girl Janhvi Kapoor." She accompanied the post with the hashtags #PilatesGirl, #Pilates, #Reformer and #TrainSmart.

Celebrity fitness trainer Namrata Purohit also trains Sara Ali Khan. Earlier this year, she posted this video of Sara Ali Khan and Janhvi Kapoor working out together and it went insanely viral. "Friends that train together stay together," she wrote. ICYMI, this is what we are talking about:

In terms of work, Janhvi Kapoor was last seen in the horror comedy Roohi, with Rajkummar Rao and Varun Sharma. The actress, who made her Bollywood debut with the 2018 film Dhadak, opposite Ishaan Khatter, has featured in films like Netflix's Ghost Stories and Gunjan Saxena: The Kargil Girl. Her line-up of film includes comedy Dostana 2, which was meant to star Kartik Aaryan earlier. The film's revised cast has not been announced as of now. She will also be seen in Good Luck Jerry.