"We made some new friends," Nupur Shikhare captioned the post 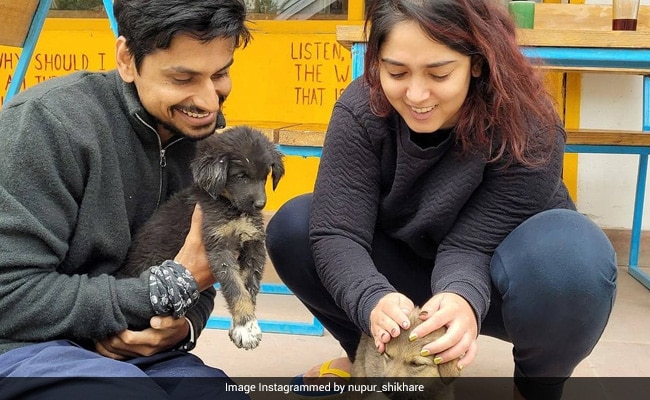 Aamir Khan's daughter Ira Khan and her boyfriend Nupur Shikhare are living their best life in Himachal Pradesh, where they are currently on a holiday (going by Nupur Shikhare's recent Instagram posts). On Thursday, Nupur posted a set of adorable or should we say paw-dorable pictures from his trip with girlfriend Ira, where the couple befriended a few local dogs. Sharing the pictures with Ira and the dogs, he captioned it: "We made some new friends." He added the hashtags #dogs, #dogsofinstagram, #puppy, #travel, #love and #cutenessoverload to his post. "Mountain dogs are the sweetest," commented an Instagram user.

Earlier this week, Nupur posted a set of photo from his Himachal trip and he gave Ira Khan picture credits. "Amazing landscape, such a pleasure to ride here," he captioned the post.

Ira Khan and Nupur Shikhare frequently feature on each other's Instagram profiles and we simply love it when that happens. They made their relationship official in February this year, when Ira shared a mushy post for him on social media and referred to him as her "Valentine."

In terms of work, Ira  made her directorial debut with a theatrical adaptation of Euripides' Medea, which featured Hazel Keech in the titular role. It premiered in different cities across India in December 2019. Ira has studied music, while her brother Junaid often assists his father in filmmaking. Ira is the younger of Aamir Khan's two children with his first wife Reena Dutta. Aamir Khan, who was married to filmmaker Kiran Rao for 15 years, announced divorce earlier this month. They are parents to son Azad.