"Our Shoot Resumes": Rajamouli Picks RRR Up From Where He Left Off. Jr NTR's First Look As Bheem Out Soon

"Life has already become a new normal. We have to adapt to it and move on," SS Rajamouli tweeted 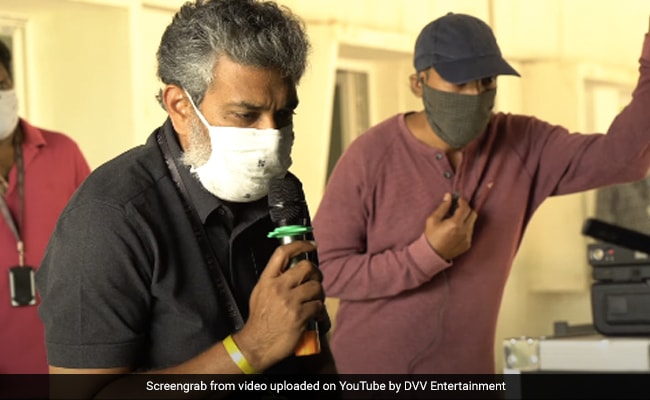 Looks like the schedule of SS Rajamouli's much talked about RRR is back on track. On Tuesday, the award-winning filmmaker announced that the shooting schedule of the film has resumed and big surprises are expected soon. "Life has already become a new normal. We have to adapt to it and move on. And so our shoot resumes," Rajamouli wrote along with a detailed video of the sanitization procedures and precautionary measures taken on the film's sets. The video ends on a dramatic note with mere glimpses of Jr NTR as Bheem and Ram Charan as Ramaraju - their faces are not revealed. However, Rajamouli promised that Jr NTR's much awaited first look as Bheem will be unveiled on October 22.

Life has already become a new normal. We have to adapt to it and move on. And so our shoot resumes... :)https://t.co/qFlpsIHJpc

Jr NTR's first look was supposed to release on the actor's birthday in May, which however, was delayed as production was shut off because of the coronavirus situation. "I am also aware that many of you are disappointed about the lack of a first look or a teaser from RRR. Believe me when I say that the team is as disappointed as you are. They have worked extremely hard and tried to come up with something worthy of the film. But social distancing guidelines and restrictions prevented the team from getting it done," Jr NTR had tweeted.

Meanwhile on Ram Charan's birthday in March, his first look as Alluri Seetharama Raju (Ramaraju) was introduced by Jr NTR.

SS Rajamouli is making RRR based on the fictional story of two revolutionaries from pre-independence era, set in 1920. RRR is special on various levels - other than casting the two superstars together, this film also stars Bollywood actors Alia Bhatt and Ajay Devgn. Alia has been roped in to play the role of Sita, Ram Charan's love interest. Ram Charan has been cast as revolutionary Alluri Sitarama Raju while Jr NTR features as revolutionary tribal leader Komaram Bheem. Ajay Devgn will reportedly play onscreen mentor to Ram Charan and Jr NTR's characters.