In another video, Shehnaaz Gill can be seen cutting her birthday cake with her mother, Sidharth Shukla and his family 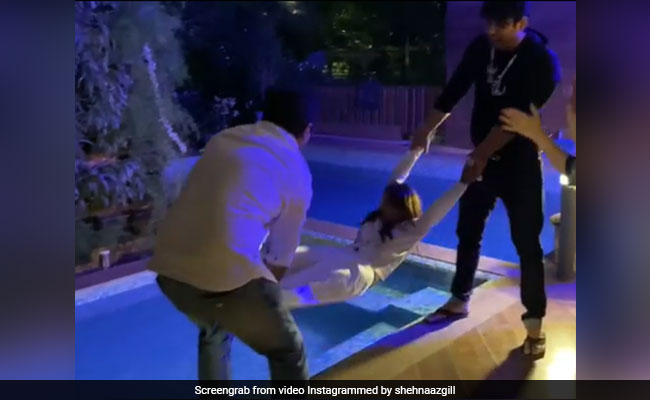 Former Bigg Boss contestant and singer Shehnaaz Gill shared glimpses of her 27th birthday celebrations with close friend Sidharth Shukla, who was her fellow contestant and winner of Bigg Boss 13, and their families on Wednesday. In one of the videos, Sidharth Shukla, 40, and one of his family members can be seen throwing Shehnaaz into a pool after her birthday countdown. It is epic. In another video, the singer can be seen cutting her birthday cake with her mother, Sidharth Shukla and his family. "Happy long life to me," she can be seen saying in the video. "Love you all," Shehnaaz Gill captioned the pool video. See her posts here:

Shehnaaz Gill and Sidharth Shukla are close friends. While Shehnaaz several times confessed her love for the actor on Salman Khan's reality show, he always maintained that they are just friends.

After the show concluded, the duo were spotted chilling together many times, with fans speculating if they have started dating. However, neither Shehnaaz nor Sidharth has confirmed their relationship.

Last year, Sidharth celebrated his birthday with Shehnaaz Gill. Se even shared a video from the celebrations. Take a look:

After Bigg Boss 13, Sidharth and Shehnaaz featured together in a couple of music videos such as Bhula Dunga and Shona Shona.

Birthday girl Shehnaz Gill has featured in several Punjabi music videos and films. Some of them are Sat Shri Akaal England, Veham, Range and Sidewalk.

Sidharth Shukla became a household name after he featured in Balika Vadhu: Kacchi Umar Ke Pakke Rishte. He has participated in reality shows such as Fear Factor: Khatron Ke Khiladi 7 and Jhalak Dikhhla Jaa 6. He has also featured in the 2014 film Humpty Sharma Ki Dulhania.