What prompted such concern is that in one of the photos posted by Neetu Kapoor, Sanjay Dutt has his eyes closed 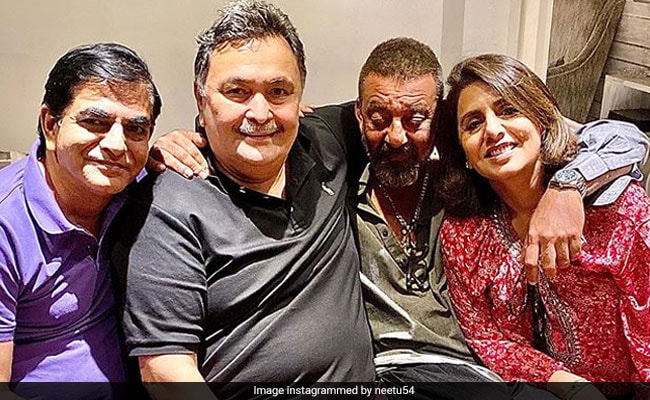 Actor Sanjay Dutt recently dropped by to visit Rishi Kapoor and Neetu Kapoor at their residence in Mumbai and turned it into a night to remember. Neetu Kapoor shared glimpses of the fun-filled time they spent with Sanjay Dutt in an Instagram post along with a thank you note: "Feels great when friends come over to just say how much they love you, how much they missed you." Neetu Kapoor's Instagram was indeed happy to see Rishi Kapoor, 67, and Sanjay Dutt, 60, in one frame but a section of netizens appeared concerned about Sanjay Dutt. What prompted such concern is that in one of the photos posted by Neetu Kapoor, Sanjay Dutt has his eyes closed. "What happened to Sanju baba?" read a comment while another added: "But Sanju sir looks very weak... Is he okay?" Another user said: "Sanju looks so old." A few comments on Instagram also politely suggested that Neetu Kapoor could have posted a better photo of the Panipat actor.

Last year, Rishi Kapoor also tweeted this photo of Sanjay Dutt and Ranbir Kapoor from a house party just days before the release of Sanjay Dutt's biopic. Ranbir played Sanjay Dutt in the Rajkummar Hirani-directed Sanju and was critically acclaimed for his performance.

On the work front, Sanjay Dutt will next be seen in Panipat, releasing on December 6. Rishi Kapoor, who returned to India after months of cancer treatment in New York, will be seen in investigative drama The Body.