On 47th Anniversary, Amitabh Bachchan Reveals The London Factor In Wedding To Jaya

"My Father asked who you going with? When I told him who, he said you must marry her before you go.. else you don't go," wrote Big B 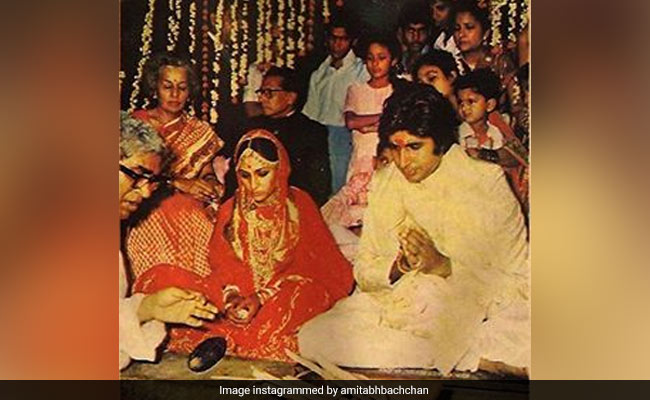 Happy anniversary, Amitabh Bachchan and Jaya Bachchan! Amitabh Bachchan, who married his Zanjeer co-star Jaya Bachchan on May 3, 47 years ago, shared the interesting story of their wedding on his social media profiles. Big B met Jaya Bachchan on the sets of the 1971 film Guddi and got married almost a month after Zanjeer released in May, 1973. In his post, Big B revealed that he wanted to celebrate the success of Zanjeer with Jaya in London (they were yet to be married), when he faced a query from his father, late poet Harivansh Rai Bachchan. "My Father asked, who are you going with? When I told him who, he said you must marry her before you go.. else you don't go.. So, I obeyed!" Take a look at the priceless throwback picture here:

Zanjeer, directed and produced by Prakash Mehra, established Amitabh Bachchan's image as 'the angry young man' in Bollywood. The film traced the story of police officer Vijay Khanna, played by Amitabh Bachchan, whose parents were murdered in his childhood. Jaya Bachchan played the role of a street performer Mala, who falls in love with Vijay. Zanjeer was a blockbuster, post its release in 1973.

Coming back to Amitabh Bachchan and Jaya Bachchan. After their wedding, Big B and Jaya Bachchan co-starred in films such as Abhimaan (1973), Chupke Chupke (1975), Mili (1975), Sholay (1975), and Silsila (1981) to name a few. Jaya Bachchan took an indefinite sabbatical from films after the birth of Shweta in 1974 and Abhishek in 1976. In more recent years, Big B and Jaya appeared together in movies like Kabhi Khushi Kabhie Gham, Kabhi Alvida Naa Kehna and Ki And Ka (special appearance).