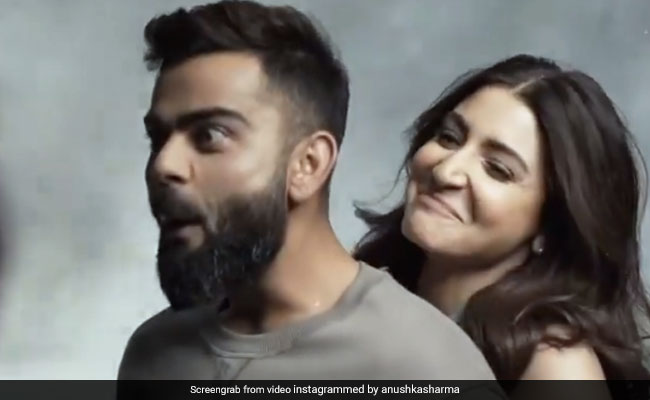 Anushka Sharma and Virat Kohli are back with another goofy video. On Wednesday morning, Anushka shared a glimpse of her shenanigans with her cricketer husband on what appears to be a shoot set. Anushka can be seen lifting Virat Kohli (quite literally) with ease - something which even takes the cricketer by surprise. "Oh teri," he says and asks Anushka to do it again. And so, she does it , after repeatedly requesting Virat Kohli to not help her in any manner: "Don't lift yourself, promise?". "Did I do it?" Anushka captioned the video and yes, she did a brilliant job.

Virat Kohli's couldn't stop laughing in the comments section of Anushka's post. His comment garnered some 7,600 likes within half an hour of being posted.

Anushka Sharma and Virat Kohli welcomed a baby daughter on January 11, who they have named Vamika. A month after the star couple became a family of three, here's the Valentine's Day message Anushka posted for Virat on Instagram: "Not too big on this day in particular but today seemed like the quintessential day for posting posed sunset photos. My valentine every day forever and beyond."

After a brief break from work, both Anushka and Virat resumed their work rosters. Virat Kohli led Team India to a thrilling series win against England last month. He was accompanied by Anushka and baby Vamika to Pune for the Test matches. After returning from Pune, the actress was spotted on the sets of a brand endorsement in Mumbai. In terms of films, Anushka Sharma was last seen in 2018 movie Zero, after which she produced OTT projects such as Paatal Lok and Bulbbul.